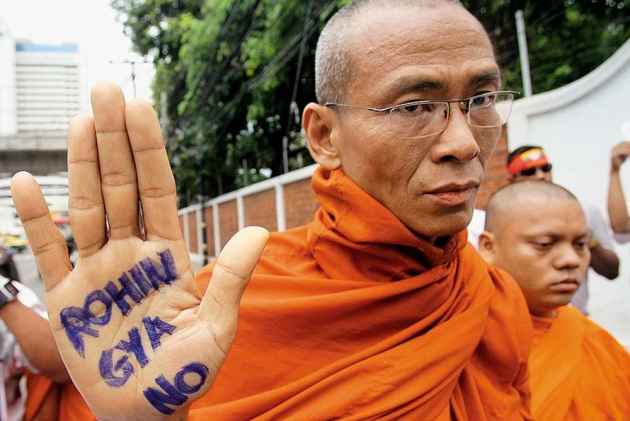 A Rohingya Muslim was stoned to death and six others wounded by a mob of Buddhists in the capital of Myanmar's Rakhine state, authorities said today, the latest flare-up in a region seething with religious tension.

The western state is a hotbed of sectarian unrest, with frequent bouts of communal violence between ethnic Rakhine Buddhists and Rohingya Muslims, a persecuted minority.

The worst bloodshed in 2012 left hundreds dead and forced over 100,000 people -- largely Rohingya -- into squalid displacement camps where they have languished for years, many facing severe restrictions on their movements.

Little has been done to reconcile the two communities, with tensions skyrocketing since October in the wake of violence between Rohingya militants and the army.

"One Muslim was killed and six others injured. Two are still hospitalised," a local officer told AFP, requesting anonymity.

The Rohingya men were granted permission to leave their displacement camp on the outskirts of the city to give statements at a criminal case in a Sittwe court, state media reported.

After attending court they requested a police escort to a nearby dock where they discussed purchasing a boat from a local businessman.

"At the boat jetty, an argument developed," the state-run Global New Light of Myanmar reported.

"They were attacked by several people with bricks," it added, referring to the incident as a "fatal stone throwing".

Myanmar has long faced international condemnation for its treatment of the Rohingya, who are considered one of the world's most persecuted people.

The Rohingya trapped in displacement camps struggle to access food, education and healthcare, conditions many have likened to a form of apartheid.

The group is loathed by many in Myanmar's Buddhist majority, who view them as illegal immigrants from neighbouring Bangladesh despite many tracing their lineage back generations. Hardline Buddhist nationalists aggressively protest any move to grant them citizenship.

She has rejected a UN probe of the alleged atrocities carried out by soldiers against the Rohingya, insisting it will inflame tensions.

But her government has set up a commission led by former UN secretary general Kofi Annan to investigate how the state's sectarian tensions can be solved.