'My Daughters Surprise And Enchant Me Every Single Day': Barack Obama 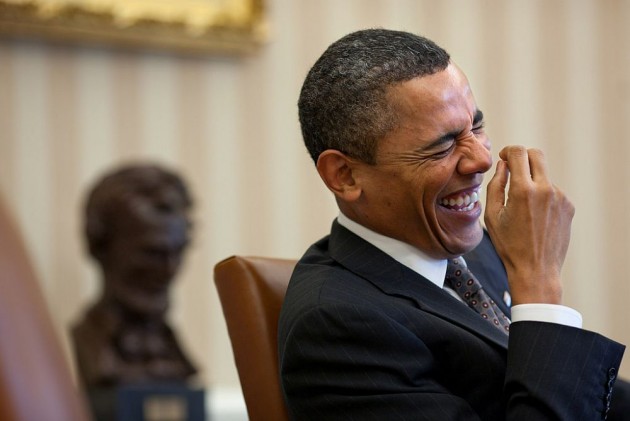 Print
A
A
A
increase text size
Outlook January 19, 2017 14:13 IST 'My Daughters Surprise And Enchant Me Every Single Day': Barack Obama

Outgoing US President Barack Obama today said his two daughters Sasha and Malia surprise, enchant and impress him more and more every single day as they grow up.

"You know, every parent brags on their daughters or their sons. If your mom and dad don't brag on you, you know you got problems. But, man, my daughters are something, and they just surprise and enchant and impress me more and more every single day as they grow up," Obama told reporters at his final news conference of his presidency.

"And so these days, when we talk, we talk as parent to child, but also we learn from them," he said.

Responding to a question, Obama said he thinks it was really interesting to see how Malia and Sasha reacted to the US election results.

"They were disappointed. They paid attention to what their mom said during the campaign and believed it because it's consistent with what we've tried to teach them in our household, and what I've tried to model as a father with their mom, and what we've asked them to expect from future boyfriends or spouses," he said.

Obama said neither of them intend to pursue a future of politics.

"And, in that, too, I think their mother's influence shows," he said amidst laughter.

"But both of them have grown up in an environment where I think they could not help but be patriotic, to love this country deeply, to see that it's flawed but see that they have responsibilities to fix it," he said.

They need to be active citizens, and they have to be in a position to talk to their friends and their teachers and their future coworkers in ways that try to shed some light as opposed to just generate a lot of sound and fury, he added.

"They have, in part through osmosis, in part through dinnertime conversations, appreciated the fact that this is a big, complicated country, and democracy is messy and it doesn't always work exactly the way you might want, it doesn't guarantee certain outcomes," Obama said.

"I expect they will be. And in that sense, they are representative of this generation that makes me really Apart from spending time with his daughters, Obama's priorities this year includes writing, to be quite a little bit.

He absolutely ruled out running for anything now.

"Well, let me be absolutely clear. I did not mean that I was going to be running for anything anytime soon," Obama said when asked about if he is exploring the possibility of a come back and entering the political arena again.

"It's important for me to take some time to process this amazing experience that we've gone through; to make sure that my wife, with whom I will be celebrating a 25th anniversary this year, is willing to re-up and put up with me for a little bit longer," Obama said.

"I want to do some writing. I want to be quiet a little bit and not hear myself talk so darn much. I want to spend precious time with my girls," he said reflecting on his first year as ex-president.

"I think it is important for Democrats or progressives who feel that they came out on the wrong side of this election to be able to distinguish between the normal back-and-forth, ebb and flow of policy -- are we going to raise taxes or are we going to lower taxes; are we going to expand this program or eliminate this programme; how concerned are we about air pollution or climate change," he said.

"I'm confident about the rightness of my positions on a lot of these points, but we got a new President and a Congress that are going to make their same determinations," he said.

"There will be a back-and-forth in Congress around those issues, and you guys will report on all that," he said, adding that but there is difference between that normal functioning of politics and certain issues or certain moments where he thinks America's core values may be at stake.

"And for me, at least, I would put in that category, efforts to round up kids who have grown up here and for all practical purposes are American kids and send them someplace else when they love this country; they are our kids' friends and their classmates, and are now entering into community colleges or, in some cases, serving in our military," Obama said.

"The notion that we would just arbitrarily, or because of politics, punish those kids when they didn't do anything wrong themselves I think would be something that would merit me speaking out. It doesn't mean that I would get on the ballot anywhere," he said.