My Book on Sonia Blown Out of Proportion: Javier Moro 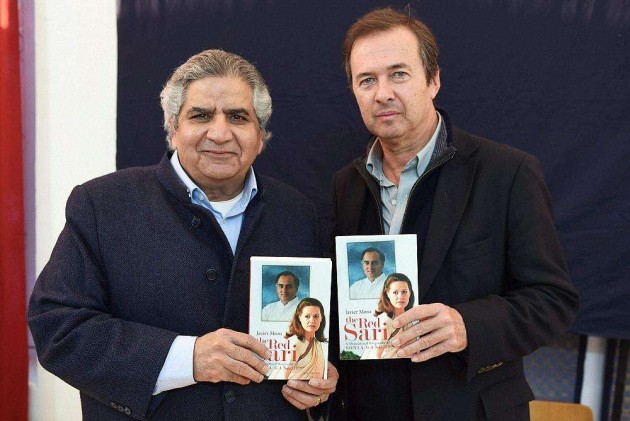 Print
A
A
A
increase text size
Outlook January 17, 2015 22:32 IST My Book on Sonia Blown Out of Proportion: Javier Moro

The Red Sari is not a historical account of Sonia Gandhi and puts her in good light but it could not be published in India around four years ago because of "poor PR people" of Congress, says its author Javier Moro.

"I never thought that the book would create a scandal. It is never a political book. I just wanted to tell the story of a remarkable lady from Italy who came from humble beginnings to become one of the most powerful figures in India," he told reporters here.

The Red Sari: A Dramatized Biography of Sonia Gandhi, first published in Spanish with the title El Sari Rojo: Cuando la vida es el precio del poder" in 2008, had created a controversy with the Congress chief's lawyers then describing it as containing "untruths, half truths, falsehoods and defamatory statements" and serving Moro with a legal notice in 2010.

The author denied charges of inventing conversations saying, literature allows that and his book is only recreating the life of a person in a dramatic way. He also claimed there is no defamation in the 455-page book translated by Peter J Hearn.

"I have not invented a single thing that could be sued for libel."

He said he could not find any reason why Congress opposed the book.

"The book puts Sonia Gandhi in good light. I still wonder why Congress was against publishing it. The whole issue was blown out of proportion by poor PR people of Congress.

"Congress wanted to project her as a marble figure or an idol which cannot be approached easily."

According to Pramod Kapoor, founder-publisher of Roli Books, the book has survived on its own.

"Certain pressures were out and conditions were made so difficult that we could not publish it in 2010. But the situation changed with the change in government last year and we decided to go head," he said.

He, however, said Roli was never told not to publish the book in 2010.

"But going by the content of the emails between Moro and Sonia Gandhi's lawyers, we decided not to publish it then."

Moro said he had plans to write a book on Sonia for a long time as his uncle Dominique Lapierre was a good friend of Indira Gandhi and he heard great stories about the Nehru- Gandhi family from him.

"But when I tried to approach Sonia Gandhi for the book, I was denied direct access. All possible doors of communicating with her were closed," he said.

"So I decided to write a dramatised version of the life of a woman who I think never wanted to be talked about. I then approached several people who were second and third circle contacts.

"When Sonia won the 2004 (Lok Sabha) elections, I knew I got the ending of my book. She ultimately reached a position she did not want to go," he said.

Moro stayed in Sonia's childhood town Orbassano for nearly three weeks and met people who knew her -- like a guy near her school who used to sell her chocolate ice-cream and a journalist named Josto Maffeo.

He said his interest was in the drama -- the smell of the house where they all lived, the flowers they put, the food she bought from markets.

About the title of the book, Moro says it is inspired by the pink sari which Jawaharlal Nehru wove for Indira Gandhi while in prison.

"Indira, Sonia and Priyanka Gandhi all wore that pink sari on their wedding. But I did not use pink as I think that name would have made my book sound like more of a fashion catalogue," he said.

Moro said that in the end he is glad that he could not get access to Sonia.

"Had I met her, I may have been strongly influenced and would not have come out with an interesting book."