Muslims Hold The Key To Electoral Outcome In UP 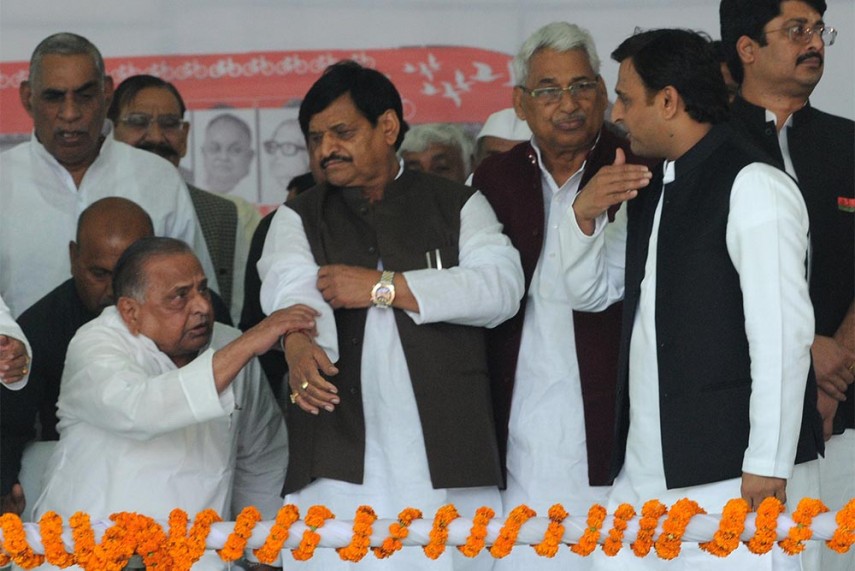 Print
A
A
A
increase text size
Outlook November 20, 2016 12:40 IST Muslims Hold The Key To Electoral Outcome In UP

Muslim voters, who account for nearly 20 per cent of Uttar Pradesh's population, can make or mar the electoral prospects of key political parties vying for the top slot in the upcoming Assembly elections.

While divided Muslim votes translate to gains for BJP, a consolidation will change the poll arithmetic as minorities play a crucial role in at least 125 of 403 constituencies, which will go to polls in early 2017.

As ruling SP grappled with internal feud, BSP supremo Mayawati sought to fish in troubled waters, seeking to drive a wedge in SP camp to wean away the crucial Muslim vote bank.

Muslims are considered the traditional votebank of the ruling Samajwadi Party and the concern over SP family feud has been voiced by several top clerics including, Syed Ahmed Bukhari, the Shahi imam of Delhi's Jama Masjid and Maulana Salman Nadvi of Lucknow-based Darul Uloom Nadwatul Ulama.

These leaders gave a blunt message to SP chief that their votes would end up with BSP if the internecine war in his party did not end.

Even a few days back, the competition seemed even – the SP was battling a damaging power struggle, BSP had been hit by desertions and Congress despite a month-long campaign to woo farmers was still struggling to be taken seriously.

But, the revocation of Ram Gopal's suspension gave a new dimension to the highly surcharged pre-poll scenario.

Mayawati termed Ram Gopal's reinstatement as a "drama" to cover up the existing bitterness between Chief Minister Akhilesh Yadav and his uncle Shivpal.

Political analysts say the development could drive the BSP supremo to think of a fresh strategy, especially in the communally sensitive western UP, where she anticipates a keen contest with BJP. So far, she has been harping on the feud in SP to caution Muslims "not to waste their votes". (MORE) BSP insiders said the party was contemplating reassessing

They were of the view that revocation of Ram Gopal's suspension was an effort by Samajwadi Party to project itself as a united outfit, especially after a bitter infighting between Akhilesh and Shivpal two months ago.

Sources said Mayawati had directed her deputy Naseemuddin Siddiqui and his son Afzal to accelerate BSP campaign in western UP to mobilize Muslim voters and showcase the party that can halt the saffron surge.

She has also promised a substantial chunk of tickets to Muslims to ensure that the community backs her party over SP.

Insiders said the party will take the help of social media to reach out to voters in shortest possible time.

They said Mayawati was of the firm view that wooing Muslims and galvanising them with her core Dalit vote bank could drum up a formidable alliance to take on BJP, which will stand to gain in the event of Muslim votes getting split between SP and BSP.

The triple talaq issue is also bringing the community together.

Analysts say as Congress is weak and SP is engaged in family battle, BSP will be their next best option.

They say that a Bihar-like 'maha-gathbandhan' in UP could have kept the Muslim flock together.

But, SP patriarch has ruled out any such alliance, though he said mergers with his party could be considered.

As the Assembly elections draw near, BJP too seems to be re-drawing its strategy by roping in as many Muslim voters as possible before the elections, and by showing itself as the primary opponent of SP.

The saffron party expects to gain those Muslim voters who have become disenchanted with SP, especially after Muzaffarnagar riots of 2013, in which over 60 people were killed and around 50,000 rendered homeless.

Muslims are also unhappy with the SP government which has not so far fulfilled its promise to ensure 18 per cent quota for them, despite the fact that reservation is not on basis of religion.

Congress too is making frantic efforts to regain its lost organisational moorings in the state and appointed Ghulam Nabi Azad as its state incharge, hoping to attract a huge chunk of Muslim votes.

Muslims, who constitute a fifth of the state's population of nearly 200 crore, are yet to open their cards as to which way they will go though the community is the cynosure of all eyes of major political parties.