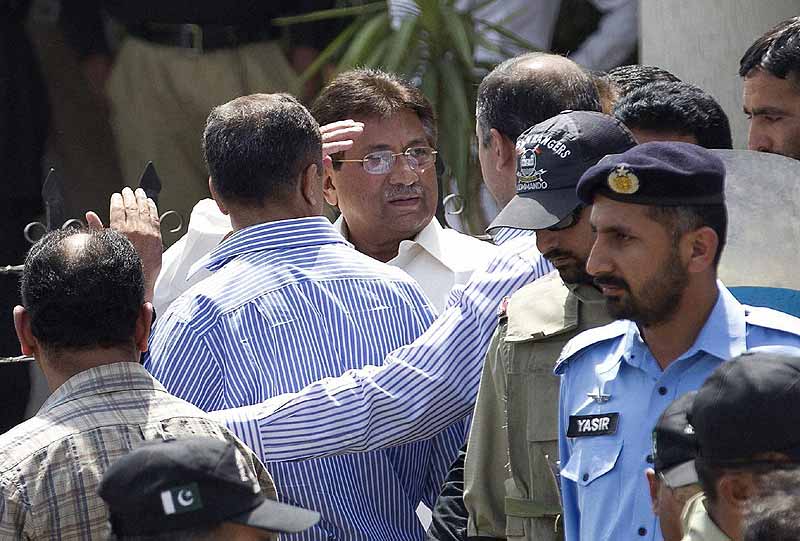 Pervez Musharraf left Pakistan early today for medical treatment in Dubai, hours after the government allowed the former military dictator facing trial in a number of cases, including for high treason, to go abroad.

"I am a commando and I love my homeland. I will come back in a few weeks or months," Musharraf was quoted as saying by the Dawn.

The former military ruler boarded an Emirates flight bound for Dubai that departed from Karachi airport at 3.55 am (0425 IST), a media report said.

"He was the last person to be embarked on the plane and then the gate was closed. The retired general appeared relaxed," the report said.

Vowing to face all pending cases against him, 72-year-old Musharraf said he was keeping himself abreast with developments in the country and will actively take part in politics after his return.

He said he was going abroad to seek "medical treatment of a decade-old illness which has now developed several complications".

Musharraf has been facing treason trial since 2013 and he was barred from leaving the country in 2014 by the government. The order was declared as illegal by the Sindh High Court the same year.

The Supreme Court on Wednesday upheld the decision of the Sindh high court, rejecting the appeal by the government.

He said Musharraf's lawyers had formally asked the government to allow him to undertake foreign travels.

According to the minister, Musharraf had committed to facing all cases against him in court and had "promised to return in four to six weeks".

"The government has decided to allow Musharraf to travel abroad for treatment. He has also committed he will face all cases against him in court," Khan said.

He was referring to several cases faced by Musharraf including the high treason charged in a special court for suspending the constitution in 2007, which has been declared under Article 6 as being punishable by death.

He was indicted in April, 2014 but since then no progress has been made in the case for various reasons.

Musharraf's All Pakistan Muslim League said yesterday that he had a backbone-related issue and needed to go to the UAE to see a doctor.

It is believed that the decision to let Musharraf go out of the country will help heal a rift between the powerful army and the government, as the former was unhappy over treason trial of the former chief of army staff.

Musharraf came to power in a bloodless coup in 1999, deposing the then Prime Minister Nawaz Sharif. Facing impeachment following elections in 2008, Musharraf was forced to resign as president and went into self-imposed exile in Dubai.