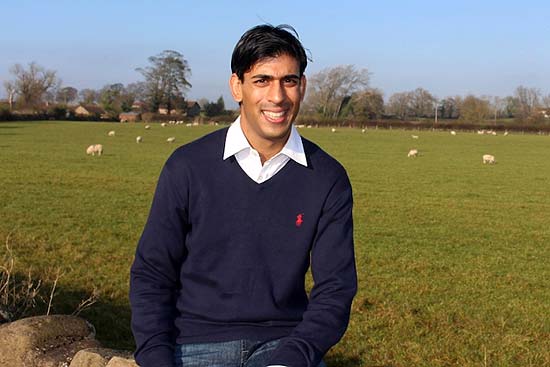 Print
A
A
A
increase text size
Outlook May 08, 2015 17:14 IST Murthy's Son-in-Law, Other Indian-Origins Elected to British Parliament

Prominent Labour candidates like long-serving MPs Keith Vaz (Leicester East) and Virendra Sharma (Ealing Southall) have won their respective seats, as they have a special connect with a largely Indian-origin electorate in their constituencies.

The Infosys co-founder Narayana Murthy's son-in-law Rishi Sunak, was contesting from the Tory safe seat of Richmond (Yorks) in the north of England and bagged 27,744 votes.

With his nearest opponent, Matthew Cooke of the United Kingdom Independence Party (UKIP), at a mere 8,194, his win marks an impressive 51.4 per cent majority to become a first-time MP in the House of Commons.

"I grew up watching my parents serve our local community with dedication. My dad is a NHS (National Health Service) family GP and my mum ran her own local chemist shop," Sunak said.

Other Indian-origin winners include Alok Sharma (Reading West), Shailesh Vara (Cambridgeshire North West), another junior minister who has been an MP since 2005. First-timer Suella Fernandes (Fareham) for the Conservatives and a Labour novice Lisa Nandy (Wigan).

The overall tally of 10 Indian-origin MPs in the British Parliament breaks the previous 2010 general election record of eight.

But it was not all smooth sailing for Indian-origin Tory candidates, with Paul Uppal losing by a narrow margin to Labour.

There were a total of 59 Indian-origin candidates in the fray from the Tories (17), Labour (14), Liberal Democrats (14), Green Party (4), United Kingdom Independence Party- UKIP (3), Independents (2) and one each from the smaller parties like All People's Party, Christian Movement for Great Britain, National Liberal Party, Socialist Labour Party and Young People's Party.

David Cameron, who looks set to return as Prime Minister, has repeatedly gone on record during the campaign claiming that he is confident that the country's "first Asian or black Prime Minister" will come from his Conservative party.

The party had also fielded the first-ever Sikh candidate in Northern Ireland, Amandeep Singh Bhogal, but he failed to make any mark coming last with just 201 votes in a DUP stronghold.

Indian-origin voters have traditionally connected more with Labour due to its working class and immigrant friendly outlook, however these elections seem to indicate a strong shift in favour of the Tory party.