'The prospect of an alliance of corporate capital and communal forces coming to power constitutes a real threat to the future of our secular democracy,' wrote Dr. Frazer Mascarenhas S.J 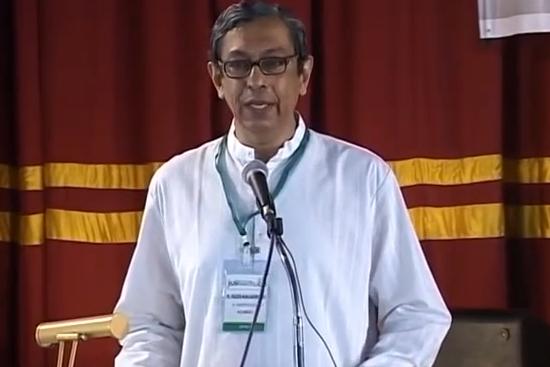 The principal of St Xavier's College here has courted a controversy after sending an advisory to his students which is critical of Narendra Modi's 'Gujarat Model' of development.

Father Frazer Mascarenhas, however, defended his action, saying his note was not against any specific individual or party. The note, which drew mixed reactions, also praises the flagship schemes of Congress-led UPA Government.

Ahead of the Lok Sabha polls in Mumbai tomorrow, the note advises students not to support leaders who are a threat to secular fabric of India. "The prospect of an alliance of corporate capital and communal forces coming to power constitutes a real threat to the future of our secular democracy," it said. 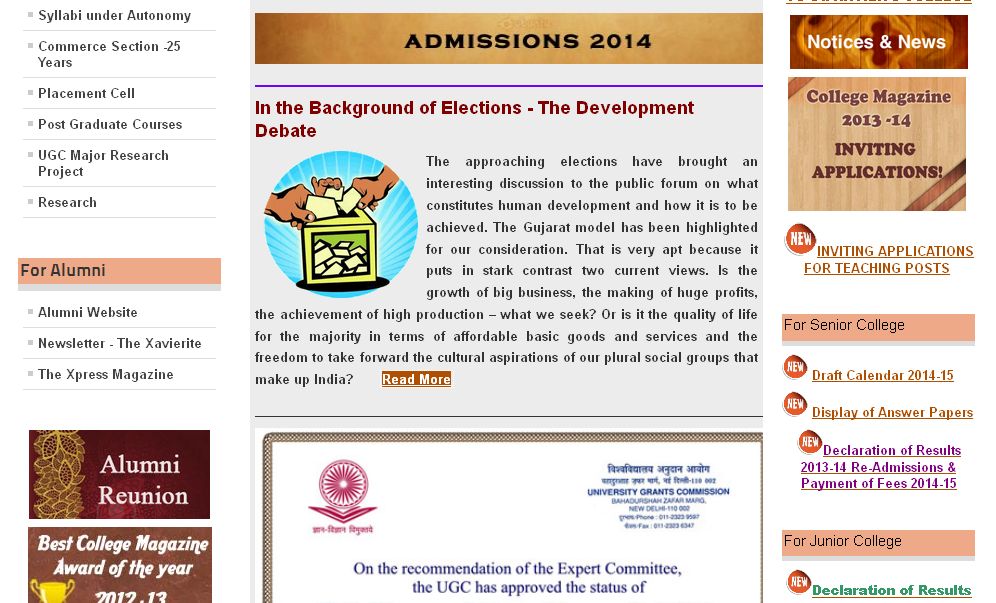 It acknowledges Congress's Food Security and Rojgar Yojana schemes. Efforts like the Rojgar Yojana and the Food Security Act have been called "election sops", it said adding "some of our best social scientists like Amartya Sen and Jean Dreze have supported these as necessary in the emergency economic situation the country and the world is facing."

In the Background of Elections - The Development Debate

The approaching elections have brought an interesting discussion to the public forum on what constitutes human development and how it is to be achieved. The Gujarat model has been highlighted for our consideration. That is very apt because it puts in stark contrast two current views. Is the growth of big business, the making of huge profits, the achievement of high production – what we seek? Or is it the quality of life for the majority in terms of affordable basic goods and services and the freedom to take forward the cultural aspirations of our plural social groups that make up India?

Gujarat may be doing well in the first sense, although not as good as some other States in the country. But all the Human Development Index indicators and the cultural polarization of the population show that Gujarat has had a terrible experience in the last 10 years. Take the example of education: schools for the ordinary populace show abject neglect with a very high dropout rate in the last 10 years. Higher Education has not been allowed to move forward. To take just an example, St. Xavier’s College Ahmedabad, thrice NAAC accredited with an equivalent of the A grade, has not been able to gain permission from the Gujarat Government for Academic Autonomy, for the last 10 years and has finally won a battle in the High Court to approach the UGC directly for this status. Gujarat has also been the worst performer in settling claims and distributing title deeds to tribal people and other forest dwellers, as shown by the latest data put out by the Union Tribal Affairs Ministry. Till 2013, the State, with 15% tribal population, settled only 32 per cent of the claims, the lowest rate in the country.

As opposed to this, efforts like the Rojgar Yojana and the Food Security Act have been called “election sops”. However some of our best social scientists like Amartya Sen and Jean Dreze have supported these as necessary in the emergency economic situation the country and the world is facing. The country is grateful that committed activists like Aruna Roy and Shailesh Gandhi have worked with the Government to initiate and sustain the Right to Information Act which makes accountability possible. Corruption still needs to be addressed effectively but since it is so prevalent at every level of society, it will take civil society long agonizing efforts to root it out.

A massive investment in health and education is sorely needed in our country of widening disparities and those who support big business and its unethical profits will never agree to such public expenditure for the masses. In fact, the worsening situation of environmental degradation and depletion, in the lunge for growth and profit, shows up the real intentions of the greedy. None can withstand this, as seen by the many clearances given in a week’s time after the recent change of guard at the Central Environment Ministry, which had earlier tried to hold the line under a different Minister.

So what lessons does a reflection on the approaching elections teach us? The prospect of an alliance of corporate capital and communal forces coming to power constitutes a real threat to the future of our secular democracy. Support for people who pledge to work to take Human Development Indicators higher and who commit themselves to a pluralistic culture in diverse India – this is the hope for the future. No magic wand or divine miracles will come to the aid of the Indian people. Their reasoned choice of individuals and political parties who promise to work for a real quality of life for all, will see India prosper or flounder on the precipice. Choose well!

As a row erupted over his remarks and its timing and with BJP demanding its withdrawal. Father Mascarenhas said, "I have not mentioned any particular individual or organisation in my communication. It was intended only to serve as a broad understanding before students exercised their right to vote."

"There's nothing more to the letter," he told PTI.

Meanwhile, when asked why he had sent out such a mail during elections, he told a newspaper, "I have given some considerations for evaluating the (Gujarat) model and also talked about other models, like the Congress government. I am trying to be as impartial as possible; it is my responsibility to encourage my students to vote.

"The 'Gujarat Model' is being discussed in every media as a successful model and I am throwing light on what I think, which also needs to be looked at," he said.

Mumbai BJP president Ashish Shelar said his party had lodged a complaint with the Election Commission, objecting to the principal's remarks, observing it was a violation of the model code of conduct.

"He did not contact BJP to get our side of the view," he said.

"We demand immediate withdrawal of the statement, immediate investigation and appropriate action for violation of poll Model Code," he said.

Father Mascarenhas, however, got the backing of leaders of Congress, NCP and the National Conference who said he is free to express his views.

"He (Father) has every right under the Constitution to express his views," Congress spokesperson Abhishek Singhvi said.

"In the world's biggest democracy, every citizen has been given a right to express his opinion. Those opposing his note are anti-democratic," state NCP's working president Jitendra Awhad said here.

"The BJP's reaction to the principal's note shows that the party and its workers are out to finish those who oppose them," he said.

Author Chetan Bhagat also waded into the row and tweeted, "I think people have the right to give their political views, even the Xavier's principal. However, students can think for themselves."

At a news conference in Delhi, BJP Spokesperson Nirmala Sitharaman said, "If it is the democratic right of an individual, then there is no question at all. But here is someone who is writing as the head of an institution, particularly an educational institution, then normally the institution does not play politics."

She said, "If the principal indeed was interested in discussing the models of growth, comparing A state with B state, then certainly as part of economics he is welcome to do so. But he doesn't sit on judgement as to which is preferable and which is not."

A Principal's email to students on politics is an abuse of authority, a signed op-ed a democratic exercise of freedom of opinion. (2/2)

Rather than writing an email to students, the Principal of St Xavier's should have written an article setting out his views. ... (1/2)