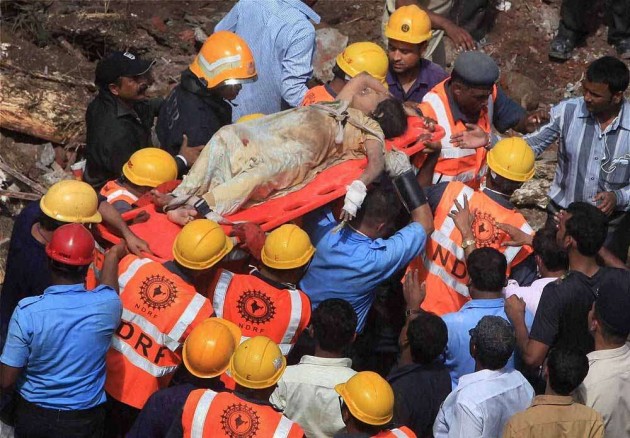 Eight of the deceased are unidentified, they said.

Yogesh Pawar (29), a journalist with Marathi daily 'Sakaal', and his father Anant Pawar, who lived in the building, died in the mishap.

Ashok Mehta, the owner of Mamamiya Decorators, who allegedly carried out faulty and unauthorised renovation at his rented office-cum-warehouse on the ground floor of the building, has been arrested. It is suspected that the renovation led to the crash, Sewri police said.

The injured have been admitted to state-run J J Hospital and Nair Hospital.

The five-storey building, owned by the BMC and located on Brahmadev Khot Marg near the Dockyard Road railway station, collapsed early yesterday morning.

Cranes and other heavy machinery have been pressed into service to lift large slabs of concrete and mangled steel.

Around 21 families lived in the 30-year-old building, categorised as a C-2, which meant it needed repairs urgently.

While Maharashtra Chief Minister Prithviraj Chavan has promised strict action against those found responsible for the tragedy, BMC has formed two probe committees and ordered audit of buildings in similar condition.

The civic body has announced a compensation of Rs 2 lakh for families of every deceased person.