Modi's Letter To Pranab Mukherjee Sets an Example of the Respect PM Should Have for Prez: Amit Shah 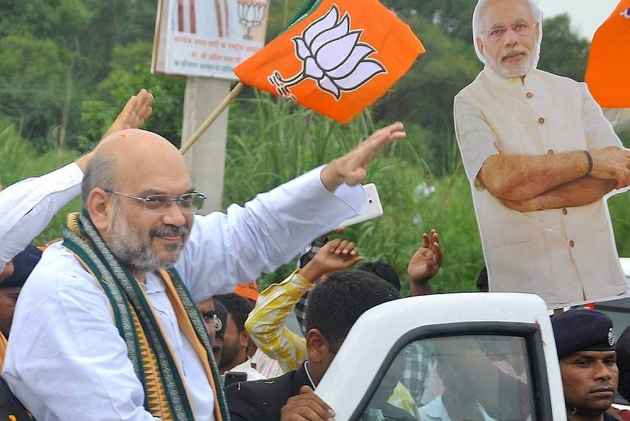 Print
A
A
A
increase text size
Outlook August 03, 2017 18:31 IST Modi's Letter To Pranab Mukherjee Sets an Example of the Respect PM Should Have for Prez: Amit Shah

BJP chief Amit Shah today said Prime Minister Narendra Modi's letter to Pranab Mukherjee on his last day as president had set an example about the kind of respect and behaviour that should be shown towards the person holding the highest constitutional office.

The letter was shared by the former president on Twitter today.

Shah said Modi's letter spelt out the bond between the two leaders from different political ideologies and was an example of how by rising above party lines, the prestige of the highest constitutional post could be enhanced with mutual respect.

"I read the letter after it was shared on the social media. Modiji is emotional by nature. But, the way he praised Mukherjee in the letter, I believe that in the coming decades, the kind of respect and behaviour a prime minister should have towards the president, PM Modi has set an example in this regard," he said at a press conference here.

Shah also said, "The prime minister has always been of the belief that the prestige of the highest (constitutional) post should be protected and enhanced. Today, a good example has been set in the country's politics (over the PM's letter)".

"Pranab Da, you have always been a father figure and a mentor to me," an emotional Modi had written in the letter to Mukherjee.

"On my last day in office as the President, I received a letter from PM @narendramodi that touched my heart! Sharing with you all," Mukherjee said in a tweet.

Modi responded by saying, "Pranab Da, I will always cherish working with you."

Shah said "after the country's Independence, an example has been presented by Pranab Mukherjee ji and Modi ji", that if two persons occupying highest posts in this country, and within ambit of the constitution, respectfully work with each other, then how it enhances prestige of the two posts.

The BJP national president, arrived here yesterday on a three-day visit to Haryana. With an eye on the 2019 Lok Sabha polls, he is on a countrywide tour to strategise and find ways to strengthen the party at the grassroot level.

He also hit out at the Congress for stalling the OBC Commission Bill in the Rajya Sabha saying it shows the anti- OBC mindset of the opposition party.