'Modiji, Does The State Need To Adopt From Outside? Is There No Youth Here?' Asks Priyanka Gandhi 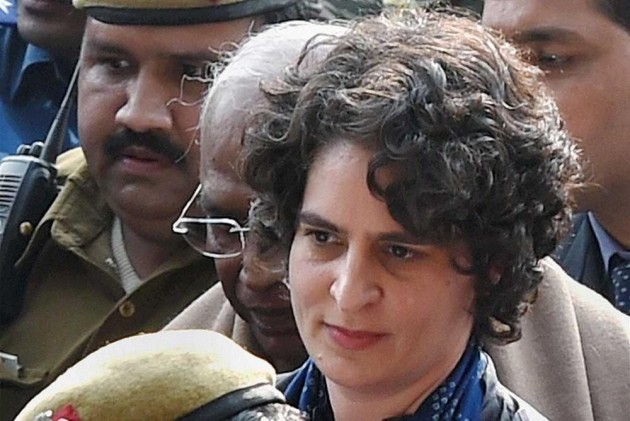 Print
A
A
A
increase text size
Outlook February 17, 2017 18:18 IST 'Modiji, Does The State Need To Adopt From Outside? Is There No Youth Here?' Asks Priyanka Gandhi

Making her maiden speech during the ongoing UP Assembly polls, Priyanka Gandhi Vadra today attacked Prime Minister Narendra Modi for his "adopted son" remark, asking if the state really needed any leader from outside when it has its own sons.

"PM Narendra Modi had earlier too said Varanasi has adopted me and I am like a son for it and will develop it...I felt, does UP need to adopt anyone from outside," she said to a cheering crowd here in the Lok Sabha constituency of her mother and Congress President Sonia Gandhi.

"Modiji, does the state need to adopt anyone from outside? Is there no youth here?...You have two such youth in Rahulji and Akhileshji before you who have UP in their hearts and mind," Priyanka told the gathering at the public meeting which was addressed by her following her brother and Congress Vice President Rahul Gandhi.

Making an appeal to the voters, she said, "Please ensure the alliance's victory."

Appealing for success of the SP-Congress alliance,

Priyanka asked voters to identify those who want to work for them. "Strengthen this alliance so that the state is strengthened and developed," he said.

The Congress star campaigner exuded confidence that the alliance will win 300 of the 403 seats in these elections.

Under the alliance, SP has left 105 seats for Congress. "I want to say that a lot of hollow promises have been made...A lot of years have passed...Ask people Varanasi," she said, adding Modi has been the Prime Minister for the past three years but "what has been done?"

"Ask people of Amethi as to how Rajiv Gandhi did what he decided when he was the Prime Minister," she said.

Referring to Modi's speeches in which he addresses women in the crowd as 'sisters' and 'mothers', Priyanka said there is no need to connect with them only through a relation. "If he has to say anything, he should look into your eyes," she said.

"If he has to tell anything, he should tell who has committed atrocity in the past six months on our daughters, sisters and women," she said.

Targeting Modi over demonetisation, Priyanka said just by clapping his hands, the savings of the women have been wasted and they were made to stand in queues in front of banks.

Turning to some issues over seat-sharing in the region among the alliance partners, Priyanka said she had a challenge before her as she wanted to field dedicated workers and also made an appeal to the people to vote for Congress candidates here.