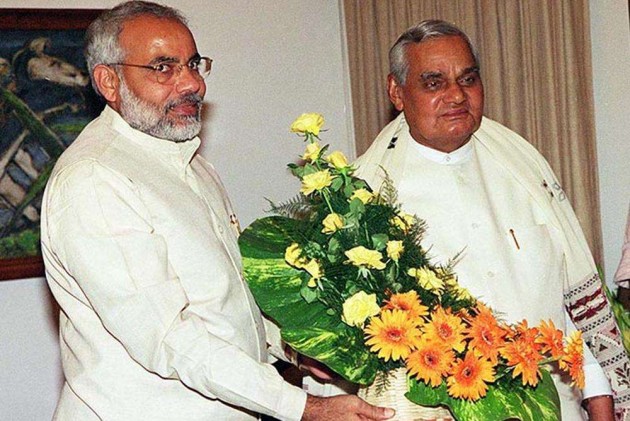 Amidst fracas over the launch here of his book, former Pakistan Foreign Minister Khurshid Mahmud Kasuri today said he is optimistic about peace between India and Pakistan and called for Prime Minister Narendra Modi to take forward Atal Bihari Vajpayee's work towards that end.

"My hope is that Modi realises that the course adopted by Vajpayee was the best course," Kasuri said at the launch of his book -- 'Neither a Hawk nor a Dove: An Insider's Account of Pakistan's Foreign Policy' -- here this evening.

Police maintained tight vigil at the venue, Nehru Centre in Worli, against the backdrop of threats by Shiv Sena that it would disrupt the event. The event ended at around 8.15 PM.

Talking about the economic costs of conflict between the two nuclear powers, Kasuri said both lost billions of rupees after Britain and the US issued travel advisories to their nationals when the armies of India and Pakistan were once involved in an eyeball-to-eyeball confrontation.

Stating that soldiers and ordinary people from both countries are killed due to the ongoing situation on the LOC, Kasuri said the solution would be to have a panel of eminent persons from both sides to monitor the situation.

"These could include judges and Nobel laureates," he added.

Kasuri, who later participated in a panel discussion, sought to explain the reason behind Pakistan's dialogue with separatist Hurriyat Conference leaders in Kashmir.

"Yesterday at an event, even your former RAW Chief AS Dulat told me that 'we (India) have feedback that you were talking the right things to Hurriyat'," he said.

"A solution which is acceptable to 100 per cent of Pakistanis, Indians and Kashmiris isn't feasible, but some thing which satisfies 80 per cent is possible," Kasuri said.

Asked if he knew if wanted underworld don Dawood Ibrahim was in Pakistan, Kasuri said, "I have no idea where he is. I was never the interior minister of Pakistan."

Referring to the charge against his country of abetting terrorism, he said, "There is no scope for non-state actors today in Pakistan." Citing the case of Waziristan, he said that Pakistan military had launched an extensive operation there to flush out such elements.

In his welcome address, ORF chairman Sudheendra Kulkarni said Mumbai is a "tolerant and liberal city" and has a special place in the history of India and Pakistan.

Kulkarni, whose face was earlier today blackened allegedly by Shiv Sena workers, thanked Fadnavis for the "principled stand" taken by him to ensure that the event took place in the city despite the opposition by Sena.

Actor Naseeruddin Shah, who was part of the panel discussion, said Kulkarni had displayed "fortitude" by going ahead with the event despite what happened this morning (blackening of face). "Never was my performance in Pakistan cancelled or threatened," Shah said.

"They blackened Kulkarni's face, but in the end, their faces were blackened," he added.

Padgaonkar said Jammu and Kashmir is not the cause but a symptom of the tensions between India and Pakistan.

He questioned Kasuri about Pakistanis trying to understand the sentiments of displaced Kashmiri Pandits.

Eminent lawyer and author AG Noorani said there was a need to lift the 'rigid' visa restrictions to improve bilateral ties between the two neighbours.

Stating that his book presents verifiable facts, Kasuri stressed, "I wouldn't have written the book if I thought there was no chance of peace between India and Pakistan."