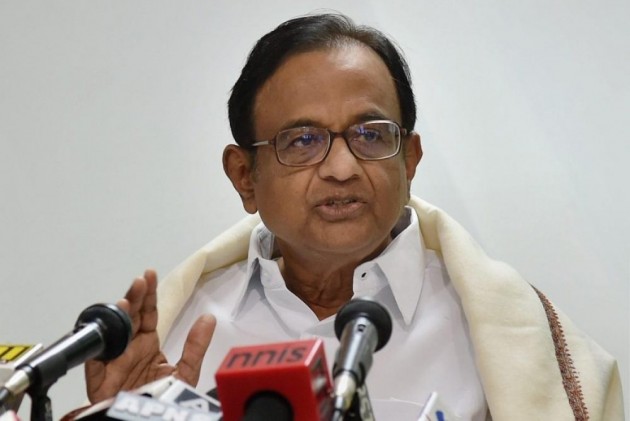 Senior Congress leader P Chidambaram today recalled that Indira Gandhi had admitted that declaring Emergency was a mistake and said Prime Minister Narendra Modi should similarly admit that demonetisation was a "flawed" decision which has badly hit the people.

Flaying the BJP regime and Modi on demonetisation, he said "demonetisation is a measure which made 45 crore people like beggars and hassled middle class people for 45 days."

The former Union Finance minister said nobody could deny that such hassles due to demonetisation (for getting cash) would continue for six more months.

Addressing a public meeting at the open grounds of party State headquarters Satyamurthy Bhavan here, he said Congress cadres should meet the people and address meetings in local languages of the respective states on the issue.

The people should be apprised that BJP's claim that demonetisation would root out black money "is a big falsehood, eliminating corruption and counterfeit currency was a deception," he said.

On Modi's statements of a 'cashless society', he wondered how it was possible when a country like USA had "46 per cent of its transactions in cash (after 300 years of its formation) and in Germany cash transactions are 80 per cent."

Chidambaram said the Prime Minister should have accepted that he had taken a wrong decision.

"He (Modi) is a big (magnanimous) man... Had he said that I made a mistake, had Modi sought forgiveness, he would have been a big man," the senior Congress leader said.

He said Indira Gandhi had generously admitted that promulgation of Emergency in 1975 was a mistake as it had led to suffering of people (not in Tamil Nadu) and promised to never do it again till such time she was Prime Minister.

"That is why she continues to live in the hearts of people as a towering leader though she passed away 32 years ago," he said.

Chidambaram said if Modi had admitted he had taken a "wrong decision based on wrong advice" and he was not told of the quantum of currency that will be scrapped, it would have been generous.

If Modi had said he was not apprised about the note printing capacity and how many months it would take to print such notes and on the duration of ATM recalibration, he would have been magnanimous, he said.

Modi should have admitted that he had not taken into consideration the fact that people would be hit and daily wage earners would be affected, Chidambaram said.

Chidambaram said that rather than accepting that what he did was a flawed decision, Modi was trying to stick to his ground.

Quoting a Tamil proverb, which meant trying to justify one's stance, despite it being flawed, he said, "Prime Minister, however, goes on and speaks gesticulating using his arms and legs and how we can accept this?"

He said Modi should have admitted that "I believed what I was told about rooting out black money...I did not pose a question as to how bringing Rs 2,000 note was a logical step when Rs 500 and Rs 1000 notes were to be scrapped."