Modi Pitted Natarajan Against Me: Rahul 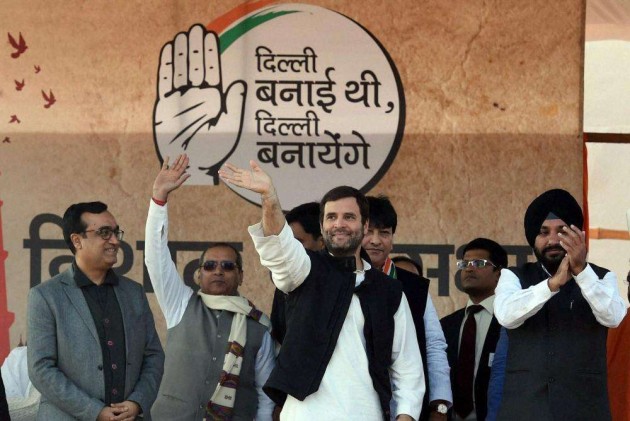 Print
A
A
A
increase text size
Outlook February 04, 2015 15:18 IST Modi Pitted Natarajan Against Me: Rahul

Breaking his silence, Rahul Gandhi today said his former party colleague Jayanthi Natarajan had been pitted against him by Prime Minister Narendra Modi as he had been fighting for the poor and other weaker sections of the society.

This was his first reaction to Natarajan's allegation that he used to interfere in grant of green nods when she was Environment Minister before being forced out in December 2013. She resigned from the party on Saturday last.

Alleging that the Prime Minister is working only to benefit his "industrial friends", he said he had joined politics to ensure welfare for the poor and the weaker sections of the society and not to benefit some businessmen.

Natarajan had last Saturday resigned from the primary membership of Congress alleging that she was "vilified" for rejecting green nod to industrial projects during her tenure as Environment Minister, which she said she had done following communications by the Congress vice-president.

She had also written a letter to Congress president Sonia Gandhi a few months back alleging that she had received specific requests from Rahul on environmental clearances and consequently rejected big ticket projects, a contention she reaffirmed at the time of announcing her resignation.

Latching on to her remarks, BJP had launched a scathing attack on the Congress leadership accusing Rahul of interfering in the government work.

Holding that most of corruption in the country is related to land, Rahul Gandhi claimed that while others talked about the problem, Congress took measures to check it.

"The maximum corruption in this country is related to land," the Congress leader said and noted that his party's government had brought the Land Acquisition Bill to deal with it.

To press his point that Congress acts against corruption, he said, "We fought in Bhatta Parsaul (in Noida in Uttar Pradesh), Niyamgiri (Odisha)."

In Bhatta Parsaul, he extended his support to farmers who were agitating against acquisition of land by the government about three years back. In Niyamgiri, he supported the cause of tribals against industrial projects.

"Earlier the Prime Minister, the Chief Minister could snatch anyone's land and their land was given to any industrialist. In Noida, 2000 acre was given for Formula One (car racing). Formula One race stopped but thousands of acres was snatched.

"We stood with farmes, waged a battle and got the Land Acquisition Bill passed. People from BJP opposed but we got the bill passed. It was not an easy job," Rahul said, observing that it was perhaps the most difficult job done in UPA II.

"I can tell you that this thing brought political damage to UPA because the powers, which incurred loss due to it, stood against us," he said.

Mentioning the work done by Congress governments at the Centre and in Delhi, Rahul Gandhi referred to measures like RTI to fight corruption and UPA's flagship rural job scheme MNREGA. He also claimed that Congress government had changed the face of Delhi.

The Congress Vice President, however, acknowledged that there were shortcomings that the party should rectify.

"We gave ownership right to 55 lakh people but that is not enough. I want that in the times to come, everybody in Delhi is given the right to roof by Congress. There should not be one person who does not have a concrete roof over his head and has no land ownership. We see this dream and I want to assure that if our government comes to power, we will give entire Delhi ownership right..

"Secondly, Delhi is a city of dreams. The rich can see dreams easily but our poor people, the contract labour, bus driver who are not sure of their job the next day always have this concern. They also have a right to see dreams," he said.

He said that if Congress had its Chief Minister, it will put an end to contract labour within a week and make it permanent within six months.

"Electricity tariff will be Rs 1.5 rupee per unit and we will make water cheaper. We can do it. We have passed land bill, RTI, Food Security. We have done it. We can do it," he said.