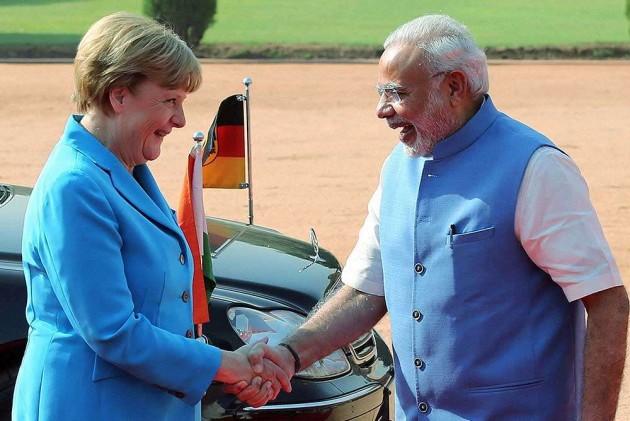 A deal to fast track clearences for German investments in India and Euro 1 billion fund for solar sector by Germany were among key takeaways from talks between Prime Minister Narendra Modi and Chancellor Angela Merkel as a raft of 18 pacts were signed to expand bilateral ties.

The two leaders also underlined the need for reviving the negotioations for the long-pending India-EU Free Trade pact with Modi asking Merkel to use her influence in the 28-member bloc to remove the impediments for resumption of the talks.

"We see Germany as a natural partner in achieving our vision of India's economic transformation. German strengths and India's priorities are aligned.

"Our focus tends to be on economic ties. But, I believe that in a world of seamless challenges and opportunities, India and Germany can also be strong partners in advancing a more human, peaceful, just and sustainable future for the world," Modi said at a joint media event with Merkel after over three-hour-long talks, both at delegation-level and one-on-one format.

The deal on fast-track approvals process for German firms envisages single point clearance for various projects which is aimed at encouraging more and more German companies to complement Modi's "Make in India" initiative and invest significantly.

A major focus of the talks were on boosting trade, increasing investment in the defence sector and promoting clean energy. Combating challenges of climate change.

The 18 pacts signed included a Joint Declaration of Intent between HRD ministry and the Federal Foreign Office of Germany on promotion of German as a foreign language in India and the promotion of Modern Indian Languages in Germany. The pact is seen as resolution of the sticky German language row.

A separate MoU will be signed later between Kendriya Vidyalayas and Maxmuler Bhawan under which German will be taught as an additional foreign language. Similarly Mmodern Indian languages including Sanskrit will also be taught in Germany.

Sharing their concerns about growing threat and global reach of terrorism and extremism, Modi and Merkel agreed to build closer collaboration to counter these challenges.

Issues relating to threat of terrorism in India's neighbourhood, particularly on its Western border figured in the talks, Foreign Secretary S Jaishankar told reporters, in an apparent referrence to Pakistan.

In his statement, the Prime Minister noted that Indo-German partnership will grow in in areas like "defence manufacturing, trade in advanced technology, intelligence, and countering terrorism and radicalism. These are important security dimensions of our expanding relationship."

The Prime Minister also thanked Merkel and the people of Germany for returning a 10th century Durga statue in her Mahishasurmardini avatar from Jammu and Kashmir.

In her comments, Merkel expressed satisfaction over outcome of the talks and complimented Modi for the "speed" in which he is pushing various initiatives. She also listed various initiatives by the two countries including in the fields of defence, security, trade and investment and solar energy.

In their talks, Merkel and Modi discussed a number of global and regional issues including challenges of climate change, UN reform, situations in Afghanistan, Syria, Iraq and Ukraine.

The joint statement said the two leaders also underlined the importance of freedom of navigation in international waters and the right of passage and other maritime rights in accordance with international law, in an apparent reference to growing Chinese assertiveness in South China Sea.

The pacts signed between the two sides will provide for cooperation in the fields of food safety, new and renewable energy, science and technology, skill development and vocational education, manufacturing, civil aviation, disaster management and agriculture.

A Joint Statement of Intent was signed between the Food Safety and Standards Authority of India (FSSAI) and the Federal Office of Consumer Protection and Food Safety (BVL) on cooperation in food safety.

Another pact was signed on cooperation in food safety between the Federal Institute for Risk Assessment (BfR) and the Food Safety and Standards Authority of India (FSSAI).

As per provisions of another pact, certain flights between India and Germany will have armed marshals on board to prevent any hijacking attempt.

A separate MoU on security cooperation proposes to intensify cooperation in countering terrorism in all its form, including recruitment, financing, terrorist propaganda, training and terrorists movements.

To enhance ties in railways sector, a joint declaration of intent was signed on the cooperation between Germany's Federal Ministry of Transport and Digital Infrastructure and Ministry of Railways.

The German side welcomed Modi's commitment to improve the ease of doing business in India. The decision to set up a Fast Track System for German companies in the Department of Industrial Policy and Promotion (DIPP) would be fully operationalised by March, 2016.

"I was very glad we were able to sign the fast-track agreement today so that the speed with which you provide licences to companies to set up business is increased," she said.

Expressing happiness over the broad range of outcomes, Modi said, "We can look forward with confidence to increased investment, trade and technology partnerships in manufacturing, infrastructure and skill development."

He said German engineering and Indian IT skills can create the next generation industry that will be more efficient, economical and environment friendly.

"1600 German companies in India, and growing in number, will be strong partners in creating a global work force in India," he said, adding German cooperation and assistance in areas like smart cities, clean Ganga and waste management projects have taken a concrete shape.

Merkel said "Energy cooperation is very much in the foreground, particularly exploring and developing rural areas is very much on our agenda."

Among the MoUs signed today include Germany's assistance to help India by sharing its expertise in vocational education and help skilling India's manpower.

Modi and Merkel expressed their full support to France for reaching an ambitious, comprehensive and equitable climate agreement at Climate conference in Paris later this year.

Both sides also agreed to initiate discussions on simplifying respective visa procedures and making them as easy and transparent as possible, especially for business persons, entrepreneurs and investors, professionals and students.

Meanwhile, asked about reports of German Defence Minister dropping out of Merkel's delegation at the last minute, Jaishankar said it was known to India beforehand and that she did not drop out.