With the Narendra Modi government in the saddle, an effort has begun to reorient the work culture of bureaucrats who were given a pep talk today by two ministers and a renowned author on how to act as "truly public servants" and change the image of "babu log (babudom)".

A conclave was specifically organised by the government for the purpose here with the theme of 'Sampark, Samanvya evam Samvad' (Connect, Coordinate and Communicate).

At the meet, the officers were given copies of My Autobiography --the second autobiography of Alex Ferguson, a former Scottish football manager and player who successfully managed Manchester United from 1986 to 2013 as part of their reorientation exercise.

"All of us will have to look at ourselves as truly public servants in our effort to change the image of the government, change the image of 'Babu log' as people call us," Minister for Power, Coal and New and Renewable Energy Piyush Goyal told the gathering of over 200 bureaucrats assembled there.

Goyal asked the officers to "give people the confidence that we are responsive to their needs, we are concerned about their problems and we will act judiciously, in a transparent manner".

He said the concerns of the people should be addressed "in a polite, decent and very caring fashion" so that people start looking up at "you as a role model of good governance".

Addressing the officials, Environment Minister Prakash Javadekar, who was the chief guest at the conclave, said the BJP-led NDA government is for poor and bureaucrats should serve them with compassion.

Chetan Bhagat, author of popular novels like 2 states and Five Point Someone who was roped in by the Government to give the bureaucrats a pep talk, narrated some anecdotes and gave suggestions to motivate them. 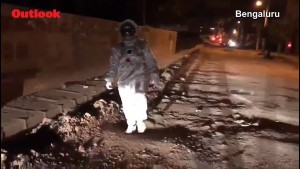