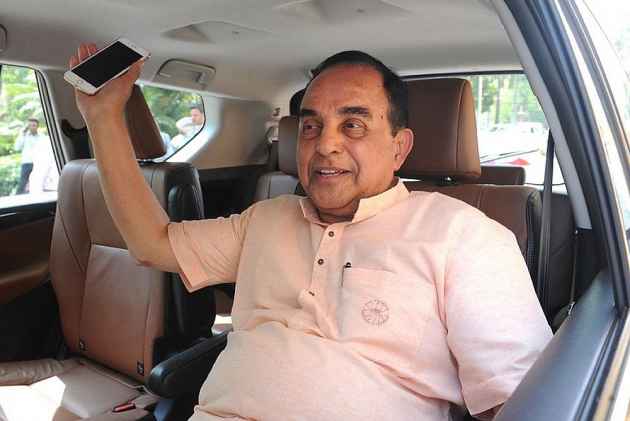 BJP leader Subramanian Swamy today said the Modi-government will bring in a law banning cow slaughter across the country.

"We don't have a law right now, but still we have two years to go... After that five years more... So a law banning cow slaughter, which is in the concurrent list, would be enacted across the country," Swamy said at a national meet on 'Bos Indicus: The Glorious Indian Cow' organised by Virat Hindustan Sangam (VHS).

VHS is a social outfit formed by Swamy himself.

"We have to safeguard the cow for a variety of reasons. Cow represents our mental liberation. So our commitment to safeguard cow is intact," he said.

The conference was jointly organised by the Bombay Stock Exchange (BSE) and Iskcon.

He said there would be no dearth of funds to protect the cows or to construct Gaushalas.

"We must elevate the status of gau-rakshaks and give them the certificate, so that no one intercepts and kills someone on the roads. All the violence that took place was by the criminals. I think gau-rakhshaks are doing a great service and a new cadre of gau-rakshaks of Hindustan will be created," he said.

Swamy said, "The Supreme Court has repeatedly said that eating beef is not an essential part of Islam... And there is no law that can prevent us from legislating that you can not eat beef."

Swamy, a Rajya Sabha member, said it was the Congress government that supported beef export in the form of different subsidies.

"The Congress government had given 13-types of subsidies to support beef export and when we came to power, we abolished these subsidies one by one and the tune of beef export has come down significantly," Swamy said.

Hosts of other dignitaries who took part in the conference also expressed their views on safeguarding cow.

"Through our foundation and in association with like minded organisations, we are going to hold camps and awareness campaigns in the schools so that the children are taught the benefits of cow protection and preservation right from the childhood days," said Arihant Rishiji.