Modi Did Not Offer Money At The Karkare Residence

Print
A
A
A
increase text size
Outlook November 29, 2008 15:22 IST Modi Did Not Offer Money At The Karkare Residence 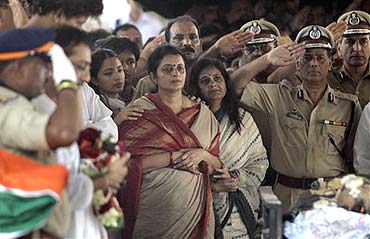 Senior police officers salute, as wife Kavita Karkare looks on during the funeral of Hemant Karkare

Gujarat Chief Minister Narendra Modi had not made any offer of any compensation when he called on the family of slain Mumbai Anti-Terror Squad (ATS) chief Hemant Karkare on Friday, his widow Kavita Karkare has said.

Karkare’s family sources said Modi had dropped in on his own at the grieving family’s home, after the officer's kin had thrice told his officials that they had no wish to meet anyone.

There had been a controversy over reports that Kavita Karkare had declined to accept any part of the Rs 1-crore Sanman Raashi Modi had offered to the kin of the 14 policemen killed in the firefight with terrorists in Mumbai.

Interestingly, before his death, Mr Karkare had been the target of a slanderous attack by several BJP and Shiv Sena leaders.

Mr Modi himself had attacked the ATS headed by Mr Karkare for its "biased" probe into the Malegaon blasts. In various assembly elections meetings, he had  gone on to claim that the arrests made by the Mumbai ATS were politically motivated, at the behest of the Congress.

Many Sangh Parivar organisations had blamed Mr Karkare individually for "implicating the Hindu religious leaders and outfits" in the probe.

It finally turned out that Mr Modi had gone to the Karkare residence on his own, even after family members declined requests that he be allowed to visit and offer condolences.

Mrs Kavita Karkare has been reported by a newspaper as saying, “It is part of our culture to be hospitable to visitors, and Modi is an elderly person. He came home, sat on a chair in the living room for a while and then told my son Akash : Aap ko koyi madad chahiye to bataiyega. He offered moral support and then left. At no point did he mention anything about any monetary support, at least not to me.”

'It Wasn't For Karkare's Family Alone'

The Gujarat government has responded by saying that the money was for families of all policemen killed fighting terror. As many as 14 Maharashtra police personnel, including two IPS officers, are reported killed in the terror incidents.

K Kailasnathan, principal secretary to the Chief Minister, said "the money was offered to Maharashtra government for the families of those policemen who died fighting terrorists in Mumbai and it was not meant for Karkare's family alone."

He said the compensation offered was the sentiment of the Chief Minister who visited Mumbai yesterday and met family members and relatives of slain police officials including Karkare's.