'Modi Bhakts to Cause His Fall Like Indira's Caused Hers': Shiv Sena 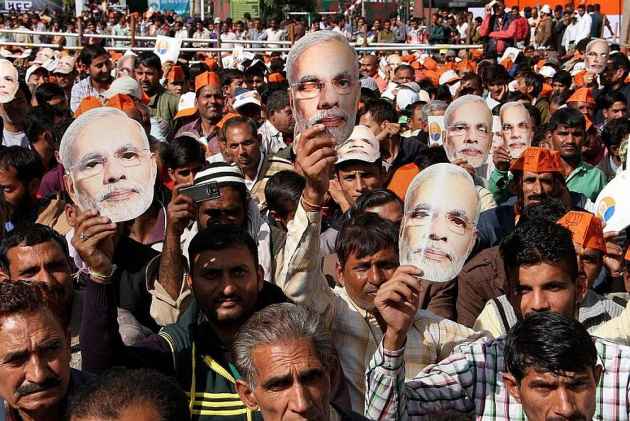 Incensed by pro-Narendra Modi slogans at a party-controlled BMC function on Wednesday, the Shiv Sena today said "Modi bhakts (supporters)" would lead to his fall just like those of late PM Indira Gandhi led to hers.

The Sena's latest outburst was triggered by pro-Modi slogans of the BJP corporators renting the air during a cheque-handing ceremony at the Brihanmumbai Municipal Corporation headquarters on Wednesday.

In the function, Maharashtra Finance Minister Sudhir Mungantiwar had handed had over a cheque of the first tranche of the GST (Goods and Services Tax) compensation to the civic body on Wednesday.

"Today, those who are unnecessarily shouting pro-Modi slogans, are actually maligning his image. There was a time when the slogans in the name of Indira Gandhi were chanted too. Her 'bhakts' had insulted the nation by shouting slogans like 'Indira is India' and that insult triggered a spark of revolution which culminated into her defeat," the Sena said in an editorial in the party mouthpiece 'Saamana.'

Sena said one should understand the difference between being proud of Narendra Modi and being frenzied about it.

"The truth is that Indira Gandhi not only won the war against Pakistan in 1971 but also made Pakistan go down on their knees by dividing that country. We want to tell the BJP leadership that Gandhi still lost and that was because of the excessive 'Indira bhakti' (worship) displayed by her supporters," the edit said.

At a time when the world was against Modi, the Sena stood by him whereas those who are now shouting pro-Modi slogans preferred to remain silent that time out of fear, it said.

"Our friend (the BJP) should remain cautious of its own 'bhakts.' Those shouting pro-Modi slogans today may become the reason for his own downfall tomorrow," the edit said.

The function held at the civic body was attended by several leaders of the BJP and the Sena, including its chief Uddhav Thackeray.

When Mungantiwar was presenting the cheque, some BJP corporators and party workers started chanting "Modi-Modi," prompting the ruling Sena camp to raise counter-slogans. During the ruckus, a BJP corporator was reportedly manhandled by some Sena workers.

"What was the need to chant Modi's name? The chief minister and the BJP president should ask themselves this question. This (GST compensation) money neither came from the BJP's treasury nor will it go to the Sena's treasury. The money will be used for the welfare of Mumbai," the Sena said.