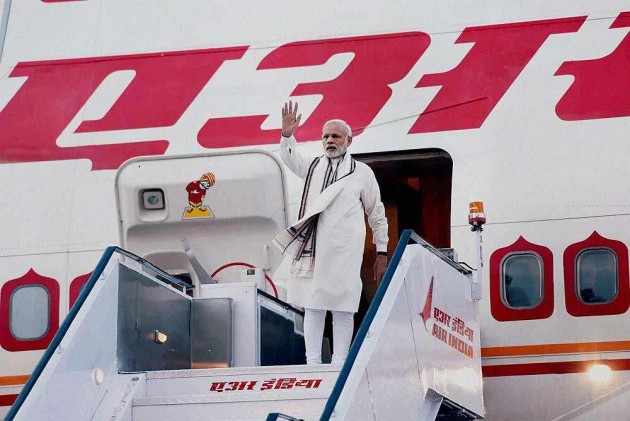 During his nearly five-hour stopover en-route to the US, Modi, who is the first Indian Prime Minister to visit Ireland in 59 years, held talks with his Irish counterpart Enda Kenny after which he hoped that Ireland's visa policy will be sensitive to the requirements of India's IT firms.

"I was pleased to exchange views on a broad range of international challenges, including terrorism, radicalisation and the situation in Europe and Asia," Modi said at a joint media event with Kenny.

He also noted that their discussions underlined the importance of closer cooperation between the two countries which share democratic values and are consistent advocates of international peace and stability.

In this context, he asserted that India has been a leading voice on universal nuclear disarmament since Independence and will remain strongly committed to that goal.

"Our credentials and record on non-proliferation are second to none," he said.

The Prime Minister also sought Ireland's support for the reforms of the UNSC within a fixed time frame – in particular, for successful conclusion of inter-governmental negotiations in the 70th year of the United Nations.

"I also sought his support for India's permanent membership of the reformed Security Council," Modi added.

On the trade front, he said the bilateral trade and investment ties were growing, despite global and regional uncertainties and the economic partnership can have a strong technology focus – information technology, biotechnology and pharmaceuticals, agricultural and clean energy.

"I also hope that Ireland's visa policy will be sensitive to the requirements of India's Information Technology firms. I also conveyed our interest in concluding a social security agreement, which will be of great help to professionals from both countries," Modi said. MORE

"India and Ireland are ideally placed to form productive

partnerships to take advantage of the opportunities in the digital age. I hope that our Joint Working Group on Information Technology will meet soon to chart out the roadmap for collaboration," Modi said.

"I am glad that we will soon have direct air services by airlines of both countries. This will not only promote our business links, but also give a strong boost to our tourism ties that are already growing at 14 per cent per year.

The Prime Minister said science and technology and education are two other areas where India and Ireland have a good history of cooperation, and where the two countries can do much more.

Ireland's Science Centre in Karnataka is one example of that cooperation, he said.

"I leave convinced that India and Ireland must invest more to realise the vast potential of this relationship. India was the first country with which you established diplomatic relations in Asia. We can now be your anchor in Asia. Similarly, for India, I see Ireland as a vital gateway to Europe and a bridge across the Atlantic," Modi said.

"India and Ireland share much in common. We can compare notes on our shared colonial history. Our Constitutions have something sacred in common. The Directive Principles of State Policy in the Indian Constitution are inspired by the Irish Constitution," he said.

"From the friendship between Rabindranath Tagore and W B Yeats to the spiritual contribution of Sister Nivedita in India, the Irish and Indian people have formed strong bonds of affinity," he said.

Today, 26,000 Indians constitute a vibrant part of the Irish community and the victims of the 1985 bombing of the Air India Kanishka aircraft find a resting place here, he said.

"In the 30th anniversary year of that tragedy, we thank you once again for the memorial that honours them," Modi said.

"In the pain of their unfading memory, we are also reminded of all that binds us today – our values and our aspirations and the challenges that we all face today. India and Ireland must seek closer partnership and cooperation.

India and Ireland are among the fastest growing economies of Asia and Europe.

"Greater sensitivity of the European Union to India's commercial interests and challenges will help us resume discussions on India-EU Broad-based Trade and Investment Agreement," Modi said.

The last Indian prime minister to visit Ireland was Jawaharlal Nehru in 1956.

From Dublin, Modi will leave for New York to address a UN Sustainable Development Summit and participate in a summit on peacekeeping being hosted by US President Barack Obama.

He then travels on to the West Coast of the US, where he will address the Indian community in Silicon Valley and hold meetings with top tech CEOs as part of this two-nation, three-city tour which concludes on September 29.

Echoing Modi's thoughts on a "shared colonial history", the Irish Prime Minister confirmed support for India's UN Security Council aspirations as a recognition of the "geopolitical realities of power bases like India" and hoped it would not be another 60 years before another prime ministerial visit from India takes place.

"We see real opportunities for Irish IT, Irish skills, innovation and to work with India on many of the Prime Minister's passions -- cleaning of the Ganges, hygiene, water. All of these areas in which Irish companies have made breakthroughs," said Kenny, who has invited the Indian President to visit Ireland next year.

The invite will be communicated to President Pranab Mukherjee by Prime Minister Modi.

"Ireland, as the only English speaking country in the Eurozone, there is real opportunity for further development. We look forward to welcoming more Indian students and tourists to the country. Specifically, the non-recognition of medical internships in India are being recognised here. We have been assured that anomaly will be addressed," he said.

Earlier, the Irish Prime Minister welcomed Modi with a warm handshake on the steps of the South Georgian Core of the enormous Government Buildings complex.

The duo then stood chatting and admiring the architecture for a few minutes before heading indoors for their "tete-a-tete".

Kenny also presented Modi with a jersey of the Irish cricket team after he signed the visitor's book at the Prime Minister's Office. Modi in turn presented a specially handcrafted piece of silver marble and roughly hewn sandstone.

The Fine Gael party leader then introduced the visiting Prime Minister to other Irish party leaders over lunch at Sycamore Room in the Government Buildings complex.

"We hope to further develop strong people-to-people and economic ties with Ireland in the years to come," Modi had said in a Facebook post.

Relations between India and Ireland date back to decades and in 2013, the total trade in goods and services was pegged at 2.48 billion euros.

The key items of Irish export include computer hardware and software, pharmaceuticals and chemicals, food and machinery.

Following the government-level interactions, Modi interacted with the Indian community in Ireland at a special event hosted at Hotel Double Tree Hilton in Dublin.

Soon after the community reception, Modi emplaned for New York, where he will address a UN Sustainable Development Summit and participate in a summit on peacekeeping being hosted by US President Barack Obama.