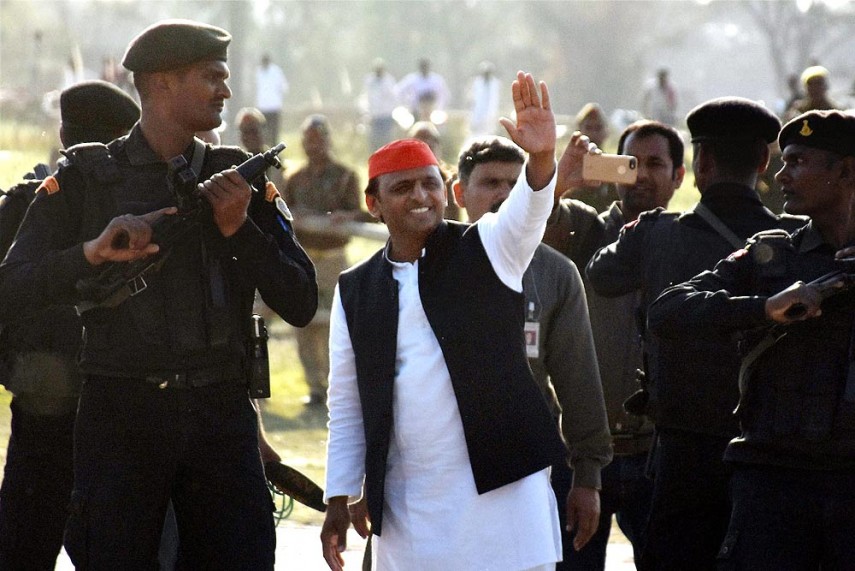 A meeting of the newly-elected Samajwadi Party MLAs today authorised its national president Akhilesh Yadav to decide the name of the Leader of the Opposition.

However, there was no decision as to who will be the Leader of the Opposition.

The meeting of the newly elected MLAs, which comes after the SP's rout in the polls, also decided to hold the party's national executive meet on March 25.

"We have authorised party president Akhilesh to decide on the name. The party's national executive will meet on March 25," SP MLA Parasnath Yadav told reporters.

He said it was not a review meeting but a get together of MLAs after Holi.

Having emerged as the largest opposition party, the leader of SP Legislature Party will also be the Leader of the Opposition by default.

"When the PM and the BJP national President were trying to mislead and gag voice in democracy during elections, SP won 47 seats," Chowdhury said, adding that some MLAs also raised the issue of alleged EVM tampering and demanded that future elections be held using paper ballots.

He said MLAs have been asked to highlight the BJP's "anti-people measures" after it takes charge and that they should continue their fight on principles of "samajwad" (socialism). (MORE) Earlier before attending the meet, Akhilesh, his uncle

Shivpal and Azam held a closed-door meeting for over half an hour.

During the elections, Shivpal was not included in the star campaigners' list and he remained limited to his constituency Jaswant Nagar (Etawah).

Besides, Shivpal and Azam, party leader Ram Govind Chowdhury's name was also being considered for the post, party sources said.

Last week, Shivpal had tweeted a video "hum ladengey aur milkar phir jeetengey (We will fight again and win together)".

As a member of Legislative Council, Akhikesh might take over as the LoP in the Upper House, replacing senior MLC Ahmed Hasan, who is presently holding the post.

Soon after accepting defeat of his party, Akhilesh had promised to play the role of a constructive opposition in the state and it will be first time when he will sit in the Opposition in the House.