MLA Engineer Rashid Marshalled Out From J&K Assembly for Disruption 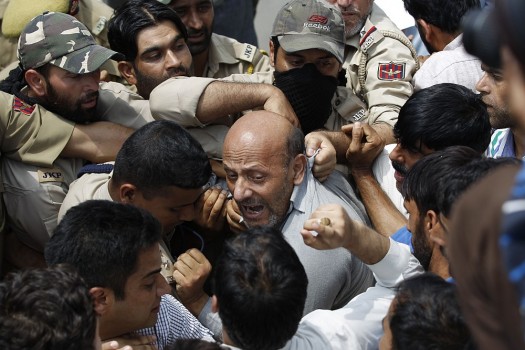 Print
A
A
A
increase text size
Outlook January 24, 2017 14:56 IST MLA Engineer Rashid Marshalled Out From J&K Assembly for Disruption

Independent MLA Engineer Rashid was today marshalled out of the Jammu and Kashmir Assembly for disrupting its proceedings when he raised the issue of detention of a minor boy under Public Safety Act (PSA) in Kotlbalwal Jail and triggered ruckus in the House.

Rashid, who has been raising the issue for the past few days in the House, resorted to sloganeering against the state government and walked into well of House when the session started.

He charged the government with brow beating the teacher and family instead of releasing the boy.

Rashid alleged the state police have detained a teacher, who issued the school certificate of the minor.

Ignoring directions of Speaker Kavinder Gupta to sit on his chair and not to disturb other members of the House, Rashid continued to indulge in sloganeering.

The Speaker ordered the MLA be removed after repeated requests failed to calm him down. He was the marshalled out.

On Monday, Rashid submitted a school certificate of the boy that stated that the student was a minor and the Speaker asked the government into look into the matter.

Speaking to reporters, Rasheed alleged that the Headmaster has been detained and entire record had been seized and boy's mother has been questioned.

"Instead of releasing the minor boy they are using brute force to suppress the voice", he charged.

Continue FREE with Ads Pay Rs. 1 to Read Without Ads
READ MORE IN:
National
Next Story : 'On Behalf Of Everyone, Our Prayers And Blessings Are With The Whole Family,': SRK On Vadodara Mishap
Download the Outlook ​Magazines App. Six magazines, wherever you go! Play Store and App Store