Mixed Response Among Parties To Mayawati's Resignation From Rajya Sabha 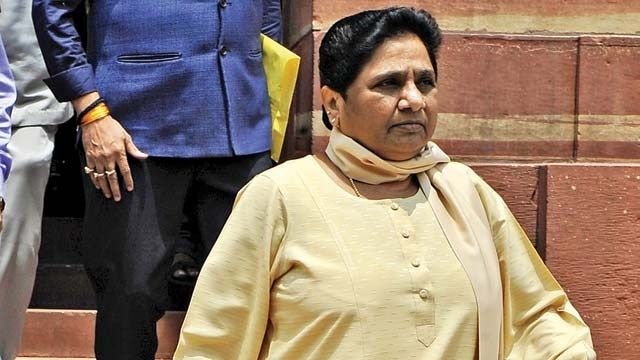 Print
A
A
A
increase text size
Outlook July 20, 2017 20:01 IST Mixed Response Among Parties To Mayawati's Resignation From Rajya Sabha

The resignation of BSP chief Mayawati from Rajya Sabha has evoked mixed response from different political parties in UP, with BJP terming it as a "political stunt" while Congress and Samajwadi Party held the Centre's attitude responsible for her abrupt decision.

"BSP supremo Mayawati is unable to digest the results of 2014 Lok Sabha elections and 2017 UP Assembly elections. People of UP have grossly rejected partisan and communal politics. They are looking forward to progress and development of the state," UP BJP spokesperson Rakesh Tripathi said.

He described her resignation as "political stunt and emotional drama".

Apna Dal (Sonelal), an ally of BJP-led NDA, attributed her decision to "massive erosion" in her support base.

"BSP chief Mayawati is feeling threatened by the rise of Anupriya Patel, whom the backwards and Dalits are looking up as their leader. Mayawati's votebase has seen a massive erosion, which has apparently upset her," Apna Dal (S) spokesperson Arvind Sharma said.

Anupriya, a senior party leader, is a Union minister and represents Mirzapur in Lok Sabha.

The Congress said that the Dalit leader took the sudden decision to quit Rajya Sabha as the BJP had unleashed "autocratic rule" throughout the country.

UP Congress spokesperson Ashok Singh alleged that ever since the BJP governmet came to power in the state, there has been an increase in crime and atrocities against Dalits.

"Mayawati had to tender resignation only to attract the attention of the government, which is working against the interest of Dalits in the state. If Mayawati wanted to say something about Saharanpur incident, she should have been allowed," Singh said.

Chief spokesperson of Samajwadi Party, an ally of Congress in the state, Rajendra Chaudhary alleged that Mayawati's right to speech and expression was violated in the Rajya Sabha.

"Mayawati took the right step as she was not allowed to speak and present her point of view," he said.

Mayawati's resignation from the Rajya Sabha was accepted today by Chairman Hamid Ansari.

The BSP supremo had resigned from the House in a huff yesterday, accusing the BJP and the Chair of not allowing her to raise the issue of anti-Dalit violence in Uttar Pradesh in the Parliament.