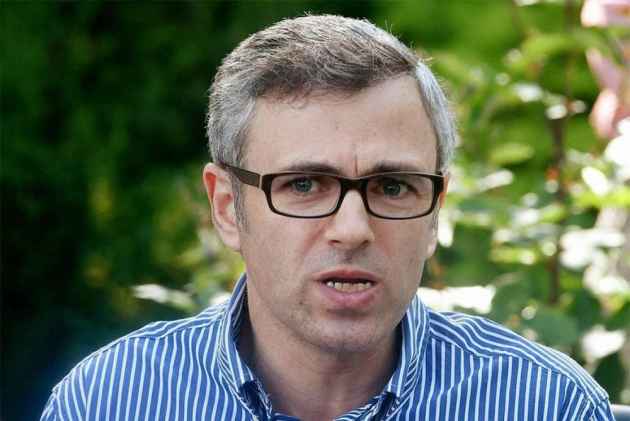 The Centre's decision not to resolve the "political issue" in Kashmir has worsened the situation in Jammu and Kashmir, former chief minister Omar Abdullah today said, stressing that military solutions cannot be used to fix a "political" problem.

Abdullah, the working president of opposition National Conference (NC), alleged the Centre has also distanced itself from all promises of the state government's common minimum programme -- Agenda of the Alliance -- formally and publicly.

The BJP, the leading party at the Centre, is a partner in the ruling coalition government in J-K with the PDP.

"While the central government's conscious decision to not engage with the political issue in Kashmir has worsened the situation in the state, the PDP-BJP government's complete and total failure has compounded the sense of unease and disaffection.

"The PDP-BJP alliance has been in power for almost two and a half years now and they have not fulfilled even a single promise both parties made individually ahead of the elections and then also collectively as an alliance in their alleged 'Agenda of Alliance'," Abdullah said.

The former chief minister said the sense of political uncertainty in J-K was "unprecedented" as the current state as well as the central government have created a very precarious situation due to complete lack of political engagement and initiative.

"The central government should acknowledge the underlying political issue in Kashmir. No amount of development or economic packages could possibly compensate for a monumental failure to address the political issue.

"Kashmir is a political issue and has to be resolved politically as per the wishes and aspirations of the people. Military solutions cannot be used to resolve a political problem," he said.

Abdullah said New Delhi should acknowledge the adverse implications of the status-quo in Kashmir and engage in sustained talks with stakeholders in J-K as well as the Government of Pakistan.

"Continued hostility between the two neighbours on the Line of Control (LoC) and the International Border (IB) has a direct bearing on peace and stability in J-K," he said.

The NC working president denounced the "anti-student and anti-youth wave of repression" in the valley, saying the "wanton use of unbridled force and oppressive tactics" against protesting students would not help in restoring peace, but would add to the "already alarming level of alienation" on the ground.

He said rather than paying heed to the "growing discontent and unease" among the youth of the state, the Mehbooba Mufti government has unleashed an "unprecedented wave of brute force" to quell student protests.

"The gravity of the situation can be gauged from the fact that teargas shells were fired even inside the premises of the Women's College in Srinagar," he claimed.

In other parts of the Valley, college and school campuses were recently put under a siege as forces were allowed to barge in and suppress student protests, he added.

Abdullah said had he been the chief minister of the state, he would have visited the Women's College here to listen to the grievances of the protesting students the very next day.

"Was it too much to expect from Mehbooba that she could have visited these campuses and especially the Women's Colleges and sat with aggrieved and anguished students and hear them out? Rather than doing that, the state government chose to invent complex motivations for these protests," he said.

Warning the J-K government against any "misadventures" on the GST regime extension to the state, he said the NC would not allow the PDP-BJP dispensation to facilitate an erosion of the state's fiscal autonomy to "please the powers in New Delhi".

"Jammu and Kashmir cannot be compared with the other states. We have our own Constitution, our special status and our own fiscal autonomy -– which is non-negotiable.

"We met the (state) Governor (N N Vohra) recently to apprise him of our stand on this crucial issue and also demanded that the state government invites all stakeholders and holds an all-party meeting to divulge its plans and policy on GST before summoning a special session of the Legislative Assembly.

"NC will not allow the state's fiscal autonomy to be eroded at any cost," Abdullah said.