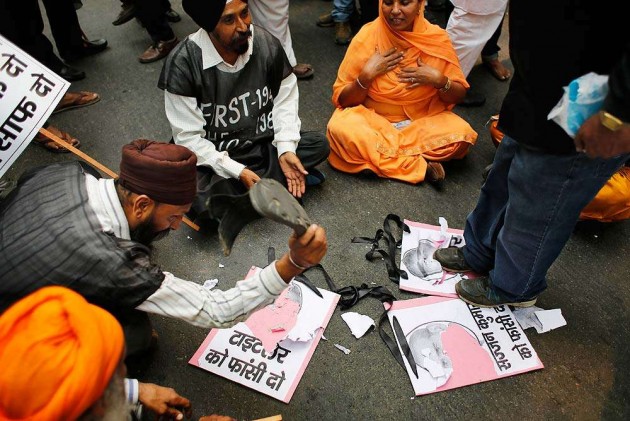 Addressing a gathering before performing the ground breaking ceremony to start the memorial's construction work at Gurdwara Rakabganj Sahib here today, Badal said the Shiromani Akali Dal (SAD) will continue its struggle relentlessly to ensure that each guilty involved in the "heinous genocide" is brought to the book.

Badal said Sikhs have faced four major "holocausts" (ghallugharas) during the history of the community, of which two were the result of the tyranny of Mughals.

"It was unimaginable that in free India the government of the country would unleash terror on them by two holocausts -- one during operation Blue Star in Sri Harimandir Sahib and second after the assassination of the then Prime Minister Indira Gandhi," he said.

The memorial in remembrance of the victims of 1984 anti- Sikh riots is being built at Gurdwara Rakabganj in the heart of the national capital.

The memorial, dubbed "Wall of Tears", is being constructed by Delhi Sikh Gurdwara Management Committee (DSGMC).

"The memorial is dedicated to the memory of thousands of innocent Sikhs killed in the massacre and those who laid their lives trying to save them.

"It coincides with completion of 30 years of massacre of thousands of innocent Sikhs in November 1984," DSGMC said in a statement.

The Chief Minister said this memorial was a tribute to the memory of martyrs and a salute to the bravery of other victims who fell prey to the perpetrators of this heinous crime.

He said the nations which forget their history were forgotten by history and that this memorial would serve as a reminder to the future rulers that uncivilised deeds were always condemned by society.

The veteran Akali leader said,"today is a historic day not only for the Khalsa Panth but for the entire country and for all civilised people in the world."

Continue FREE with Ads Pay Rs. 1 to Read Without Ads
READ MORE IN:
Parkash Singh Badal National
Next Story : 14 Killed as Bus Rolls Down in Gorge in HP
Download the Outlook ​Magazines App. Six magazines, wherever you go! Play Store and App Store