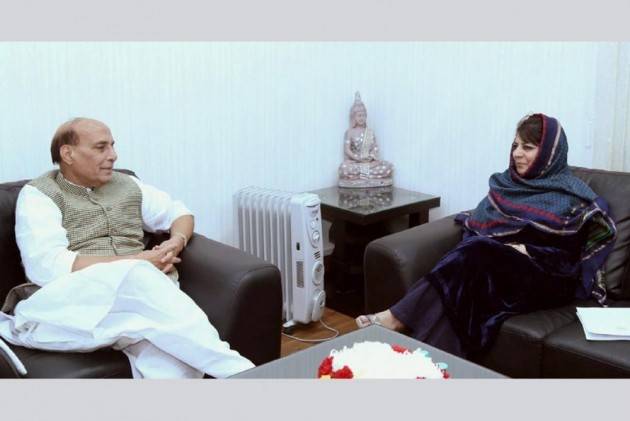 Jammu and Kashmir Chief Minister Mehbooba Mufti today rejected the opposition demand for setting up of an inquiry commission into the recent unrest in the Valley even as she blamed NC and Congress for sowing the "seeds" of the turmoil in the state.

On the opening day of the Budget session of the Assembly here, she said the alliance of 1987 between NC (National Conference) and Congress had led to the weapons being given to the youth of Kashmir.

She was responding after Congress member Rigzin Jora blamed the "unholy alliance" of PDP and BJP in the state for the turmoil in the Valley which erupted in July last year and continued for over five months.

He also demanded setting up of a commission to probe last year's unrest that was triggered by the killing of Hizbul Mujahideen commander Burhan Wani in an encounter.

"Some people here say that a commission should be set up to probe it (unrest). But just yesterday I received the report of the (Justice M L) Koul Commission set up to probe the 2010 killings.Let us first fix the responsibilities in it (2010 killings) and talk of new commission only after reading that report," the Chief Minister said, responding to Jora's demand.

She was referring to the unrest of 2010 during the NC- Congress rule when Omar Abdullah was the Chief Minister.

Hitting back at the opposition, Mehbooba said, "The situation which you have created... We all should sit and find a solution to it."

Tearing into the opposition charges, Mehbooba said, "What should you call the alliance of 1987 when the youth of Kashmir were handed over the guns. The seeds of turmoil were sown at that time. Slogans of plebiscite were raised and it was said that J-K will be separated from India and made a part of Pakistan."

"Their slogan was that Kashmir will become part of Pakistan," she said, claiming that the alliance of 1987 led to weapons being handed over to the youth of Kashmir.

Her remarks came during the Assembly Session which was adjourned for the day normally after finishing of the day's business of obituary reference.

As Mehbooba was speaking, NC MLAs created commotion in the House objecting to her remarks and pointed out that her father and former CM late Mufti Mohammed Sayeed was part of Congress at that time.

Amidst the uproar, the CM said the situation in the past few months has been bad and several people, including security forces personnel, have lost their lives which should not have had happened.