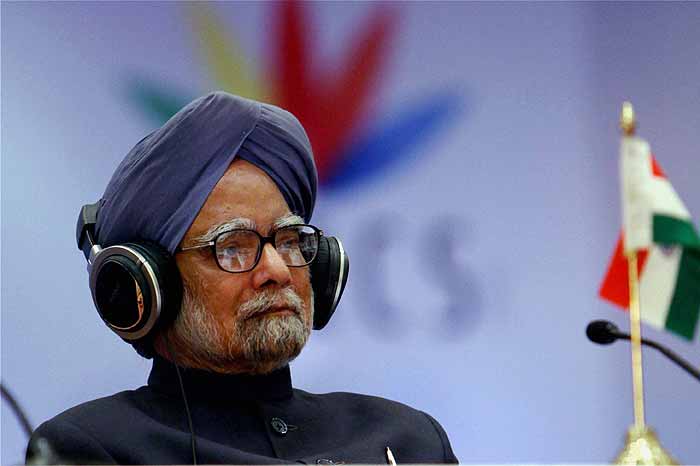 outlookindia.com
-0001-11-30T00:00:00+0553
Terming as "alarmist" a media report that the Army moved two units towards Delhi in January without informing the government, Prime Minister Manmohan Singh today said such reports "should not be taken at face value".

"These are alarmist reports. They should not be taken at face value," Singh told reporters on the sidelines of a function to give away the Padma awards at the Rashtrapati Bhawan here.

Singh was asked to comment on a media report that the central intelligence agencies reported that on the night of January 16, an unexpected - and non-notified - movement by a key military unit from the mechanised infantry based in Hisar in the direction of the capital.

The Prime Minister said that the Ministry of Defence had already issued a clarification in this regard.

The report had gone on to say:

Essentially, late on the night of January 16 (the day Army Chief General V K Singh approached the Supreme Court on his date of birth issue), central intelligence agencies reported an unexpected (and non-notified) movement by a key military unit, from the mechanised infantry based in Hisar (Haryana) as a part of the 33rd Armoured Division (which is a part of 1 Corps, a strike formation based in Mathura and commanded by Lt Gen. A K Singh) in the direction of the capital, 150 km away.

Any suspicion was still considered much too implausible, but lookouts were alerted as a routine step. This was part of a protocol put in place in June 1984 when some mutineers from Sikh units had moved towards the capital in the wake of Operation Bluestar.

The lookouts confirmed the movement of what looked like a sizeable unit. It was soon identified as an entire unit of Mechanised Infantry, with its Russian-made Armoured Fighting Vehicles (AFVs), carried on 48 tank transporters. The movement was towards the capital, which was odd.

No such thing had been notified. The Army Day celebrations had ended just the previous day (January 15).

It was still a cause for curiosity and some confusion — more than much concern — because, over the decades, New Delhi has come to be totally relaxed and trustful of the apolitical and professionally correct nature of its military leadership.

The situation changed rapidly, though. Reports came in of yet another military movement “towards” Delhi. This unit was identified as a large element of the airborne 50 Para Brigade based at Agra.

The lookouts were activated south of Delhi as well and the column was identified.

By this time, both columns were being tracked and “watched”. A bemused establishment raised an alert of sorts. The Defence Minister was informed. Immediately, the Centre put in motion an old contingency plan to delay just such a move.

The report went on to say that the Army had a simple explanation that it was all a simple fog-time exercise, but the paranoia ran so high that it was then viewed with scepticism at the highest level.

Defence Minister A K Antony has termed the report as "absolutely baseless" and dismissed fears of any coup attempt by the armed forces and expressed confidence that they will not do anything to undermine democracy.

"Absolutely baseless. Army has already explained this. It is usual, natural activities. Nothing unusual. We are absolutely confident of the patriotism of the armed forces. Don't question their patriotism. They will not do anything to undermine Indian democracy," he told a press conference here, replying to a question about the Indian Express story.

The questioner asked about the report raising considerable alarm and fears of a coup and whether the government was afraid of such a possibility and what did it do. Would he rule out the possibility of a coup?

Antony said the armed forces personnel were "true patriots" and "don't question the patriotism of the soldiers who are dying in the frontiers of the country."

"I am proud of the Indian Army, Navy, Air Force and the Coast Guard," he said.

He also urged the media not to lower the dignity of the armed forces on issues of national security.

The Defence Minister said, "The Prime Minister is the ultimate arbiter and he will take the ultimate decision. Cabinet will take decision and in between there are process. When the demands will come is it a confrontation, it is a healthy thing."

He said he is comfortable with all chiefs of armed forces specially with three service chiefs officially and personally also.

"We must spend more on defence"

"As a Defence Minister I will demand more money for my ministry but is it a fight with the Finance Ministry?" Antony asked.

"Yesterday, we had the DAC (defence acquisition council) meeting. We decided to demand more money for the capital budget and revenue budget for this year and for the more years to come.

"We have finalised our annual plan proposals and the LTIPP (long term integrated perspective planning) for 2012 to 2027 and we are going to demand more money. We have to revisit the recommendation of the Financial Commission considering the security scenario around us. If we want to protect our national interest and security we must spend more on defence. But is it a fight with the Finance Ministry and the government?" he asked.

Praising the Finance Ministry, Antony said, "Armed forces will request more for budgetary allocations... There was 18 per cent increase (budget allocation). I do not think Finance Ministry was unfair. But they have their limitation and we have our requirement."

On the BJP's demand for his resignation, he said, "They are an opposition party. Service chiefs writing letter to PM and Defence Ministry is not unusual. It happens many a time. It will happen in future also. It is their duty."

Political parties reacted with caution to the news story.

BJP said it was "assured" by clarifications from the Army and government on reports of troop movement to the capital but insisted that the Prime Minister should proactively restore the equilibrium between the Defence Ministry and armed forces.

"There are reports today in a newspaper of unusual movement of Army units around Delhi in January. Both the government and the army have categorically denied it. We are assured to learn about this denial," BJP Chief spokesperson Ravi Shankar Prasad said at a press conference.

While being cautious and responsible on the issue, BJP did not let go of an opportunity to hit out at the government. It heaped praise on the Army for its sacrifice and professionalism but made a scathing attack on the government for failing to check its growing differences with the Army.

"We must ensure- and that is indeed very important- that there is no room or apprehension for any sponsored story. The relationship between the army and the political leadership of the country is at an all-time low. This is a matter of very deep concern," Prasad said.

"We want the government to be more proactive. Several questions have arisen about the Army. The Prime Minister has spoken one or two lines today after a long silence. We expect he will speak more on this sensitive issue and play a more proactive role... This must end," Prasad said.

Terming reports about "unusual" troop movements towards Delhi as "very serious", the CPI asked Defence Minister A K Antony to clarify what had actually happened and sought a probe into the incident as well as the reported differences between the army and the Ministry.

"Unfortunately, this report has come in the backdrop of reported misgivings between the army and the Defence Ministry. There has to be a comprehensive inquiry into all these things. These issues cannot be separated as these are matters concerning national security," new CPI General Secretary S Sudhakar Reddy said.

In a statement, Defence Ministry spokesperson Sitanshu Kar said, "the points raised in the report have already been clarified by the Army...Such exercises are conducted by the Army from time to time." He also dubbed the report as "baseless and incorrect".