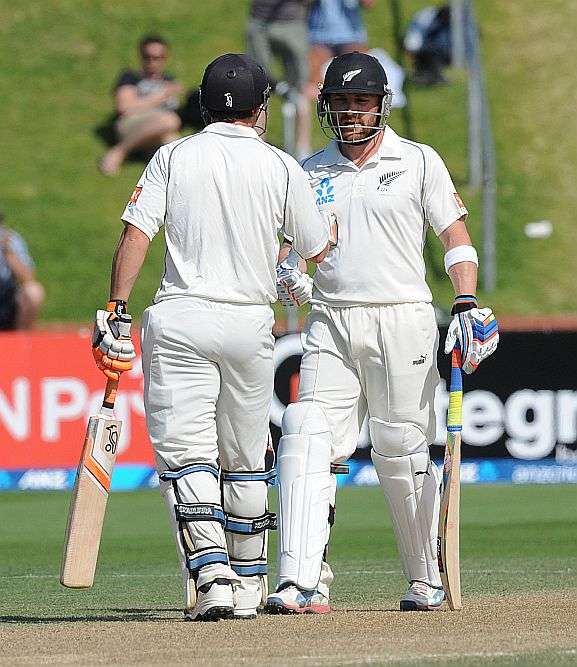 India were pushed to the backfoot as New Zealand rode on captain Brendon McCullum's unbeaten double century and his world record stand with B J Watling to continue their remarkable fightback by taking a massive 325-run lead in the pulsating the second cricket Test here today.

McCullum remained unbeaten on 281 runs and shared a world record partnership of 352 runs for the sixth wicket with Watling (124), helping the side reach a formidable 571/6 at stumps and take the game away from India at the Basin Reserve.

India, who had New Zealand in a spot of bother at 94 for five in their second innings yesterday, are now facing the prospect of even losing the match with the hosts swelling their lead to 325 runs.

The duo defied the visitors for 123 overs and turned around a 246-run deficit into a massive lead with one day left in the match.

With their push for a series-levelling victory now appearing to be out of their grasp, India now face the risk of even losing the game if they don't bat well in their last innings.

McCullum was still batting after nearly six sessions at the crease, facing 525 balls and hitting 28 fours and four sixes. At the other end, James Neesham brought up his maiden Test fifty and was unbeaten on 67 off 93 balls, with 9 fours.

For India, Zaheer Khan (3-129), Mohammad Shami (2-136) and Ishant Sharma (0-124) toiled hard on an unresponsive pitch, particularly with the third new ball. Ravindra Jadeja (1-108) was rendered ineffective as well. Part-timers Rohit Sharma (0-40) and Virat Kohli (0-13) were given a go to try something different, while skipper MS Dhoni (0-5) also bowled after the tea-break.

Starting at 440/5 after tea, the set batsmen had another string of batting records coming their way, with the pitch playing perfect foil to them. As Dhoni bowled his gentle medium-pace first up, McCullum and Watling crossed the 350-mark for their partnership in the 159th over.

An over later, they brought up the highest ever sixth-wicket partnership in Test cricket breaking the 351-mark by Mahela and Prasanna Jayawardene, also set against India at Ahmedabad in 2009. Their lead also swelled to 200 in the meantime.