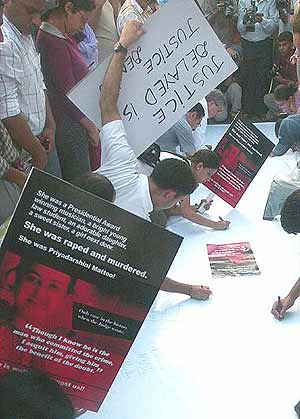 outlookindia.com
-0001-11-30T00:00:00+0553
The Supreme Court today commuted the death sentence of accused Santosh Kumar Singh in the sensational 14-year-old Priyadarshini Mattoo rape and murder case, sparking strong reaction from the family and friends of the victim.

The apex court bench comprising Justices H S Bedi and C K Prasad upheld the conviction of Singh, then a law college student, for killing and raping Mattoo, his junior, but reduced the death sentence to life imprisonment, saying certain things were in his favour.

"The conviction is maintained," the Bench said adding however, "To our mind, certain things are in favour of appellant (Singh). We are converting the punishment of death sentence into life imprisonment."

Singh, son of a former senior IPS officer, had challenged his conviction and death sentence awarded by the Delhi High Court which had set aside his acquittal by the trial court in the case.

The lawyer appearing for the Mattoo family said that he will file review or curative petition seeking enhancement of the punishment after perusing the verdict.

The verdict drew instant reaction from the father of the victim who expressed dis-satisfaction on the commuting of death sentence.

"I am not satisfied with the sentence. This can be discussed only by the legal experts as it is quite evident that even the Supreme Court has upheld the verdict of the Delhi High Court," Chaman Lal Mattoo said.

"Well, our family, we feel utterly disappointed and shattered. At least the life imprisonment should not be reduced at any stage where entire society will be in danger," he said.


"There were various instances where the convicts have managed to come out," he said, adding, "This is the danger. The case has not met the right treatment by the apex court."

Terming the verdict as a "setback", the counsel, appearing for victim's family, said, "He was not an ordinary criminal and therefore, it (case) was the rarest of rare category."

The CBI counsel, however, hailed the outcome of the 14-year old case saying "the probe agency is satisfied as the verdict of the Delhi High Court has been upheld."

The Delhi High Court judge, who had awarded death penalty to Singh in the case said he did not view the Supreme Court's decision of commuting the sentence as a failure of judicial system as apex court judges are "wiser".

"It is all right if the Supreme Court says that the case does not deserve maximum punishment (death penalty). The apex court judges are wiser and they have profound knowledge of law," Justice R S Sodhi, who is now retired, told PTI.

The former judge of the High Court said the SC judges did not concur with his findings that the case fell under the rarest of rare category, warranting imposition of death penalty.

"I don't view it as a failure of the judicial system. On the contrary, one must understand that the Supreme Court consists of very wise judges with people having sound knowledge of law. They have held that my opinion that this case fell in the rarest of rare category is wrong," he said.

"Personally, there is nothing for me to be happy or sad about it but since the Supreme Court upheld that conviction adjudicated by the Delhi High Court, I feel satisfied," Justice Sodhi said.

National Women's Commission (NCW) Chairperson Girija Vyas expressed sadness on the verdict which has come after 14 years of struggle
.
"I am pained, sad and worried," Vyas told reporters here soon after the verdict was pronounced.

However, Santosh Singh heaved a sigh of relief after the pronouncement of the verdict.

"I am feeling relieved. I am happy and satisfied with the the court's judgement," he told jail officials who informed him about the apex court verdict.

Singh, now lodged in Jail No 2 with 1,000 other prisoner, has spent almost seven years in Tihar jail.

The jail official said, "He had earlier spent over three years in jail from 1996 to 1999. After the CBI began the investigation he was again back in August 2006 and is here since then."

Singh was acquitted by the trial court on December 3, 1999, but the Delhi high court had on October 27, 2006, reversed that decision by holding him guilty of rape and murder.

CBI has sought upholding of the death sentence saying the high court had correctly appreciated the evidence leading to his conviction.

The apex court had on July 29 reserved its verdict on Singh's appeal.

Singh, a law student in the Delhi University, had raped and murdered Priyadarshini, a third-year law student, in January 1996.