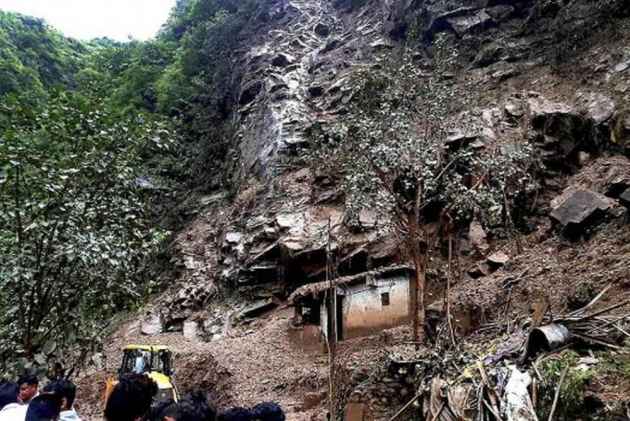 A massive landslide has killed at least 46 people and injured several others at Kotpuri near Padhar on the Mandi–Pathankot national highway in Himachal Pradesh even as it buried two buses.

The toll could rise further as over 50 passengers were travelling in the two buses hit by the landslide, which was triggered by a cloud burst, they said. Some other vehicles may also have been hit, the officials said.

"Forty-six bodies have been recovered, and of these 23 have been identified," an official said.

Rescue operations were suspended late evening as there were apprehensions of more landslides, he said, adding the rescue work would resume tomorrow.

Teams of the National Disaster Response Force (NDRF), the Army and the police rushed to the spot and heavy earth-moving machinery was deployed at the gorge where the two buses lay buried under a heap of debris.

Chief Minister Virbhadra Singh visited the spot. He said that eight passengers were travelling in the Manali-Katra Volvo bus, of whom three lost their lives, while five were rescued and taken to the zonal hospital in Mandi.

There were around 47 passengers in the second bus which was on its way from Manali to Chamba, an official said. The chief minister said the state government would bear medical expenses of the injured. He also met the bereaved family members and expressed condolences.

Thakur announced financial assistance of Rs 4 lakh each to the next of kin of the deceased, while Bali announced that Rs 1 lakh would be given to each bereaved family by the HRTC.

The massive landslide, covering an area of more than 250 metres, may have swept away some other vehicles also and damaged some houses, an official said.

The highway was closed and hundreds of vehicles were stranded on both sides, officials said.

D D Sharma, Director, Disaster management, Himachal Pradesh government said that a team of forensic experts had also been called considering that several of the bodies were mutilated.

Prime Minister Narendra Modi also condoled the deaths. "Pained by the loss of lives due to landslide related accidents in HP's Mandi district. My condolences with the families of the deceased," Modi tweeted.

"I pray for the quick recovery of those injured," he added.

The district administration released the names of 12 victims, including two women.

The deceased were identified as Suruchi Thakur from Jogindernagar, Neha from Sarkaghat, Vinod Kumar From Padhar, Suresh Kumar from Mandi, Babu Ram from Udhampur, Pawan Kumar from Manali, Khub Ram from Kullu, Kartar Chand from Baijnath, Subash Singh and Mandeep Singh from Jammu and Kashmir and Ajay from Kapurthla in Punjab.

Anxious relatives awaited the news of their relatives who were travelling in the buses.

Mala Devi from Kullu rushed to the spot after she came to know that about the accident. Her three children were returning in one of the buses with their aunt from Chamba, where they had spent their summer vacations.

An eyewitness, Bodh Raj, who was travelling in a jeep along with two other persons, said he had stopped his jeep 100 metres behind a bridge. Meanwhile, the Chamba-Manali bus arrived and stopped near the bridge.

Suddenly the hillside came crashing down and the bus was pushed into a deep gorge and covered under debris.