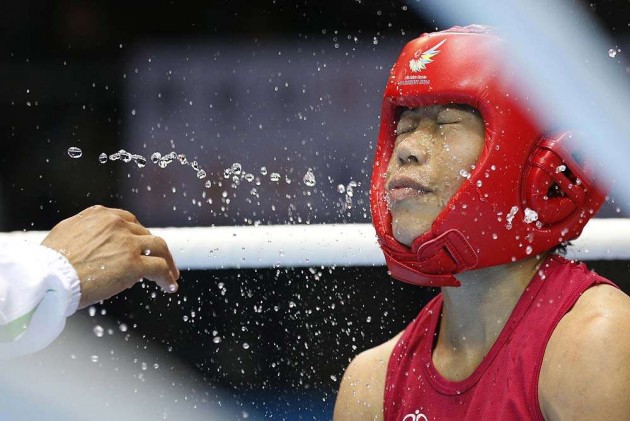 Olympic medallist pugilist M C Mary Kom today said she has decided to quit boxing after the 2016 Rio Olympic Games as her body would not be able to cope with the rigours of the sport any further.

The 32-year-old has been giving hints for some time that she may hang up her boxing gloves but today she made it clear that the Rio Games next year will be her last competitive event.

"I have decided that I will quit after 2016 Olympics. Rio Games will be my last competitive event and I will not continue after that," Mary Kom said at the launch of a social media campaign here.

"My third child is two years old and I think it's enough for me. Who would have faced the rigours of competitive boxing after having three children? I want to bring happiness to the people of this country by winning a gold in Rio. I want to win a gold there and so I thought of continuing till 2016 Games," said May Kom who won a bronze medal in 2012 London Olympics.

Mary Kom said after the Rio Games she will concentrate on her boxing academy set up in Imphal which is expected to be inaugurated shortly by Prime Minister Narendra Modi.

"I have planned out what to do after Rio Olympics. I will give my full time to my academy. I want to produce more Mary Koms, more world champions. I will also be available to support any social cause," she said at the launch of 'Boxout', a digital campaign against social evils initiated by Dida Sportswear at IIT Delhi.

"Prime Minister told me to inform him before the inauguration of my academy. The academy is in the final phase of completion and I am expecting the PM to inaugurate it," Mary Kom said.

The diminutive boxer expressed disappointment at the infighting prevalent in the boxing community in the country and said the pugilists were the only sufferers.

Asked what's the future of Indian boxing, she said, "What do I say? There is infighting in the federation. Some would say to do this and others will say to do that. The boxers are confused and they don't know what to do. Unless there is unity, we will not get anything. Boxers are the only sufferers."

Mary Kom said she is yet to start "proper training" but would start doing that once her boxing academy is inaugurated.

"I am yet to start proper training. I am doing whatever is required to maintain fitness. I have to make myself to a level of fitness before starting proper training which I think will begin next month," she said.

Asked if she was thinking of setting up boxing academies in other states of the country, Mary Kom said, "It is very difficult to set up an academy. It is very expensive. It is even more expensive to maintain it. Let me first inaugurate my academy in Manipur.

"I am not setting up the academy in Manipur to earn money. I am helping poor youngsters who cannot afford to take up boxing. If somebody can help me, I can open boxing academies in other states. Or I can help other people to open academies," said Mary Kom who considers legendary professional heavyweight boxer Muhammad Ali as her idol.

The objective of the campaign was to 'box out' the evils in the society like sexual abuse, eve teasing, acid attacks, corruption, among others.

Mary Kom unveiled the blogging page of 'Box Out' campaign - (www.didasportswear.com/boxout) by registering herself as the first member of it.

"Work on your fitness for at least 40 minutes in a day so as to stay fit and fight against the evils like eve teasing, sexual abuse etc," she said while giving tips of self defence to the students.

"I have donned my gloves this time for the cause of humanity to box out the evils plaguing the society. I appreciate the 'Box Out' campaign initiated by Dida Sportswear and I am sure our campaign will help us in creating awareness in the society to fight against these evils," said Mary Kom who is also the brand ambassador of Dida Sportswear.