Martyred CRPF Jawans Were Having Lunch During The Deadly Naxal Ambush 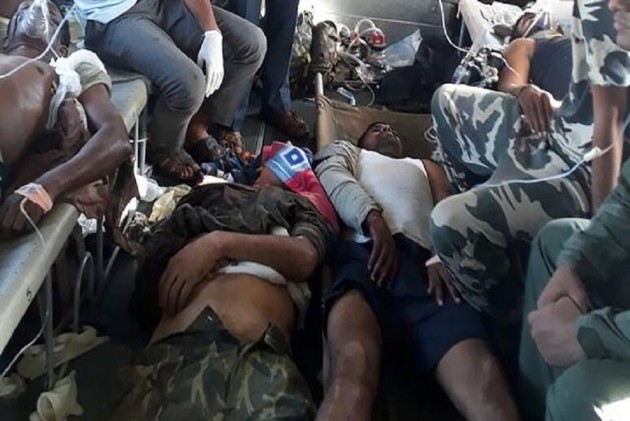 Print
A
A
A
increase text size
Outlook April 25, 2017 15:57 IST Martyred CRPF Jawans Were Having Lunch During The Deadly Naxal Ambush

The 25 CRPF jawans who were killed in a deadly Naxal ambush in Chhattisgarh's Sukma, were having lunch when a hail of bullets and grenades hit them fatally.

A party of about 36 troops, out of the total 99, came under the first assault after they had ventured out from Burkapal yesterday to sanitise and provide protection to a 5.5-km long road construction work connecting Chitagufa in the said district, officials said.

The Maoists squad "very discreetly with the aid of locals" kept tracking the movement of the troops when one party of 36, out of the total three, sat down for launch, the strong squad of Naxals, possessing sophisticated weapons, took them by surprise and rained heavy gun fire, they said.

While a top CRPF officer said the killed troops had "finished their lunch" and may be were not in an absolute alert mode for the next few minutes, other officials said "some of them were having their lunch" when the attack was launched around 12:30 PM.

While the slain 25 men and about six others who were injured, tried to gather their weapons or take aim at the marauding Naxals, the others on the guard duty mounted an effective retaliation and saved about 40 civilians and construction workers who were present in the vicinity of the area during the deadly assault that lasted over an hour.

What has surprised multiple security officials whom PTI talked to, is the fact that the Maoists are understood to have used few under-barrel grenade launchers (UBGL), a smart and sophisticated weapon used by security forces, to inflict fatal casualties on the troops by lobbing grenades in quick succession.

"It is very likely that these UBGLs were looted from security forces only. That could be as recent as the incident where 12 CRPF men were killed in Sukma on March 11," a senior officer said.

He added that while no Improvised Explosive Device (IEDs) was used in the ambush, the favourite weapon for inflicting damage on security forces, what claimed the lives in the biggest Naxal ambush of the country in the last three years was heavy usage of gun fire and grenades.

Officials said as the troops of the 74th battalion of the CRPF, that came under attack, and few other similar contingents have been going out on the same track for some time and hence there was a possibility that their "presence was being tracked, marked and trailed" by Maoist cadres.

"Our men have told us that the villagers were making movements close to them. Villagers were also taken as shields by Naxals and that restricted our fire for some time," the officer said.

At present the troops were securing a culvert that is being constructed on the road and it would have taken about four-five months more to complete this task, the officer said.

The area where the deadly blood bath took place is considered the stronghold of south Bastar Divisional Committee of the Naxals headed by Maoist commander Raghu and is under the Jagargunda Area Committee led by another red ultra Papa Rao.

Officials said "it is beyond doubt" that the assault would have been led by the the 1st battalion of the Naxal People's Liberation Guerrilla Army (PLGA) led by Naxal commander Hidma who is said to be active in the area at present in view of the Tactical Couter Offencive Campaign (TCOC) undertaken by Naxals during summer months to assert their influence in the area.

Continue FREE with Ads Pay Rs. 1 to Read Without Ads
READ MORE IN:
Raman Singh National
Next Story : Those Wearing Saffron Scarves Have Got Licence to Beat Cops in UP, Says Akhilesh Yadav
Download the Outlook ​Magazines App. Six magazines, wherever you go! Play Store and App Store