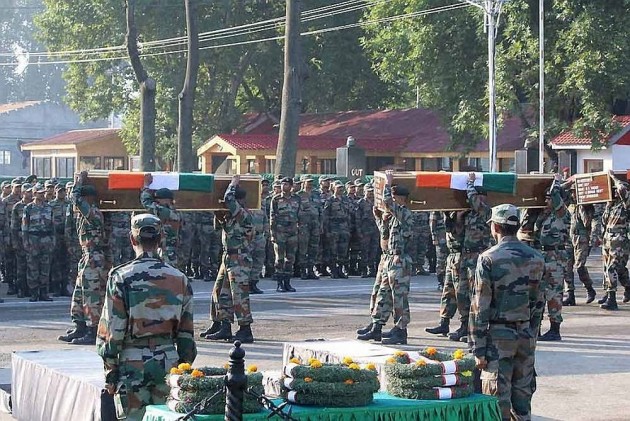 The last rites of Hawildar Sukhraj Singh, who was killed in the Nagrota terror attack, was held with full state honours in his native place here today.

Singh, 32, was among the seven army personnel killed when heavily armed terrorists in police uniform stormed an Army unit at Nagrota, about three kms from the Corps headquarters on the outskirts of Jammu city.

The martyr's body wrapped in the tricolur was brought in a bedecked Army vehicle and a large number of people reached here to pay their last respects to Sukhraj Singh, who had joined the Indian Army 11 years ago.

His elder brother Dhanraj Singh lit the pyre, amidst chanting of patriotic slogans.

An army contingent of 21 soldiers paid tributes by reversing their arms and firing shots in the air.

Deputy Commissioner Pardeep Sabharwal announced Rs 5 lakh ex-gratia and a government job to the next kin of martyr Sukhraj Singh.

His wife Harmeet Kaur had said yesterday that her husband was posted at Nagrota in Jammu six months ago and was to come home on leave on November 29.

"But instead of going on leave, he fought the terrorists and attained martyrdom," she had said.

The soldier's family members demanded that Pakistan be "taught a lesson" for harbouring terrorists.