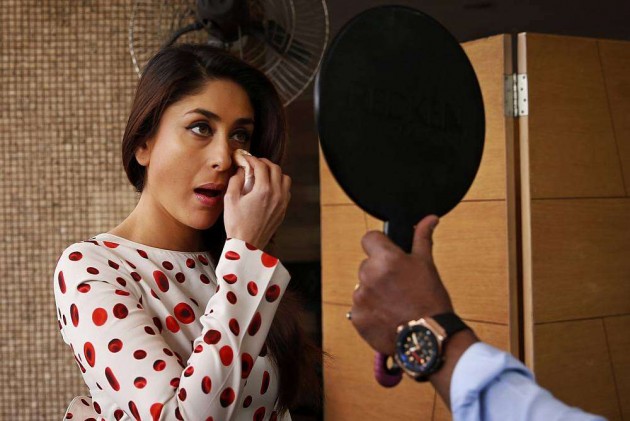 Married to actor Saif Ali Khan, Kareena Kapoor says she is happy that unlike other married actresses she is still signing films opposite top-notch commercial actors like Salman Khan and Ajay Devgn.

"I am getting the opportunity to work with Ajay and Salman and I don't think a lot of married actresses get that opportunity actually. They all get into the art zone space in films. They are still waiting for great scripts," Kapoor told PTI in an interview here.

In Singham Returns the 33-year-old romances Ajay Devgn while in Kabir Khan's upcoming film Bajrangi Bhaijan, the love story of a Muslim man and Brahmin woman, she is cast opposite superstar Salman Khan.

When asked whether marriage has affected her equity in the film industry she replied in the negative.

"Clearly not. Marriage just not comes in the way thankfully at least in my life. I am working with actors who can work with an 18-year-old girl. When Rohit Shetty approached me, he said I have written the role for you and I can't see anyone else doing those crazy things," she said, adding that she wants to have fun at this stage of her life.

Describing herself as a commercial actress, Kapoor, who has given hits like Jab We Met and Golmaal 3, said she is also hearing scripts of content-based films.

"But I will not do a film only because the critics will love it. I do not need to prove my talent now," she said, adding that she is looking for performance-oriented roles because she wants to work for the next 25 years.

Following her natural instinct she has traversed genres with films like Chameli, Asoka, Heroine, etc and has never planned her career.

"I think I am the only actress who has not planned her career. People ask me what I want to do and I tell them that I just want to act in films which I would personally like to watch," Kapoor said.

She is not ashamed of doing song-and-dance roles in films.

Giving the example of Raj Kumar Hirani's 3 Idiots, she said the film had a strong underlining message but one cannot take out her 'zoobi doobi' song and dance in a wet sari.

"And then it becomes a package," she said.

"I am a very romantic person. I am still in the times of DDLJ. That is my personality. I also enjoy the song and dance but I don't like action too much, I am not doing so much of action," the actress said.