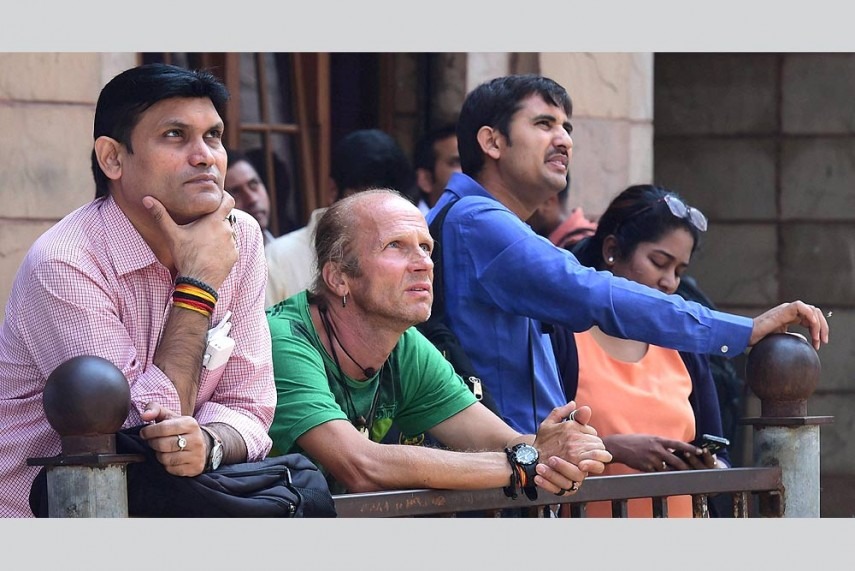 Technology stocks took a beating today after Infosys' share buyback plan and revenue outlook failed to move investors as the Sensex dropped 182 points to an over two-week low and the Nifty broke below 9,200.

On top of it, disappointing macro numbers and persisting military concerns relating to the Korean peninsula and West Asia pulled down the indices.

The barometer had lost 145 points in the previous session.

The IT index bore the brunt after Infosys revenue guidance and plan to return cash to shareholders fell short of the crease, going by the Street expectations. Shares of Infosys slumped 3.86 per cent. TCS and Wipro too came under pressure and fell.

The exchanges will be closed tomorrow for Baba Ambedkar Jayanti and Good Friday.

Mood dampened further after government data, released after trading hours yesterday, showed that industrial output slipped to a 4-month low by contracting 1.2 per cent in February and fuel prices drove retail inflation to a five-month high of 3.81 per cent in March.

Metal, capital goods, auto, FMCG, power and consumer durables indices all fell by up to 2.84 per cent.

A weak trend in Asia reflecting losses in the US because of continued geo-political trouble and comments by US President Donald Trump on the greenback roiled the scene.

According to financial services major Nomura, India's GDP growth is likely to decelerate to 6.7 per cent in the March quarter but will gradually recover, which cast its shadow, traders added.

Tata Steel, Tata Motors, Adani Ports, Bharti Airtel, Maruti Suzuki, L&T and ITC, too ran up losses. A total of 18 scrips out of the 30-share Sensex pack lost while 12 others closed higher.

The broader markets were ahead of the benchmark, with the BSE small-cap and mid-cap advancing.

There was no respite from selling by foreign portfolio investors, who net sold shares worth Rs 580.70 crore yesterday, showed provisional data.

Other key stocks in Asia too ended lower. Europe remained in the negative zone.

Continue FREE with Ads Pay Rs. 1 to Read Without Ads
READ MORE IN:
Business
Next Story : Pakistan's Top Generals Say No Compromise Will Be Made on Jadhav
Download the Outlook ​Magazines App. Six magazines, wherever you go! Play Store and App Store