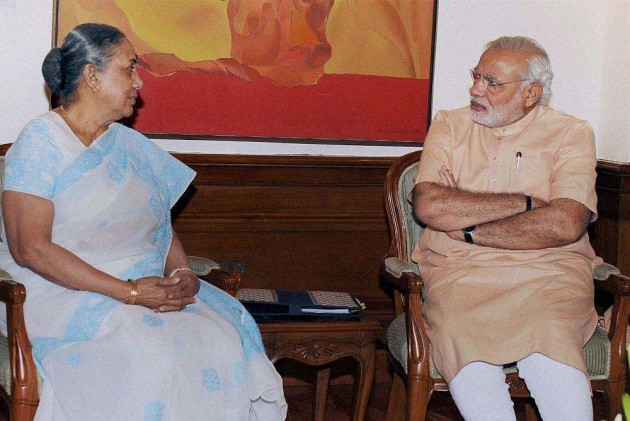 Margaret Alva was today sworn-in as the Governor of Goa at a function at Raj Bhavan here.

Alva, as the governor, is now holding charge in Rajasthan, Gujarat, and Goa.

Previous Goa Governor B V Wanchoo resigned on July 4, a day after CBI quizzed him in VVIP chopper deal case. He was appointed on May 4, 2012.

Chief Justice of Bombay High Court Mohit Shah administered the oath of office to Alva at Durbar hall of Raj Bhavan this evening in the presence of Chief Minister Manohar Parrikar, his cabinet colleagues, leader of opposition Pratapsingh Rane and others.

"I am very happy to be back in Goa. I love Goa," she said, talking to reporters after the ceremony.

"I have been associated with Goa since '70s. I have spent so many holidays here with the friends. So coming back to Goa is like coming back to the place where I belong. Everybody loves Goa," said Alva, who was Congress's 'desk in-charge' of the coastal state until some years ago.

When asked whether she would like to have 'permanent' appointment as Governor here, she said, "I have (charge of) three states now. I am looking after Gujarat, Rajasthan and Goa, it is for the government to decide where they want me."

She would be going back to Rajasthan tomorrow as the budget would be presented in Rajasthan Assembly on Monday, she said.

Alva has been a minister in the Union Government, member of Rajya Sabha and Lok Sabha, as well as general secretary of Congress.

She was appointed as the Governor of Uttarakhand in 2009, and transferred to Rajasthan in 2012.