Many People, Including Youths, Ready To Sacrifice Lives For Gorkhaland, Says GJM 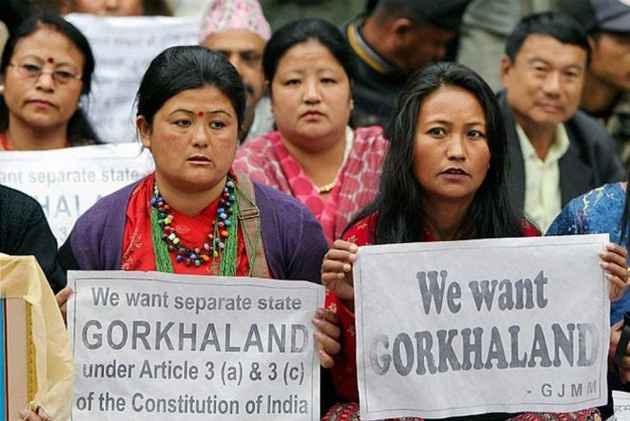 Print
A
A
A
increase text size
Outlook July 16, 2017 09:54 IST Many People, Including Youths, Ready To Sacrifice Lives For Gorkhaland, Says GJM

A number of people, mostly youths, are ready to sacrifice their lives for the cause of a separate Gorkhaland state, the group spearheading the movement has claimed.

The Gorkha Janamukti Morcha (GJM), which is leading the shutdown in the hills since June 15, had threatened to start a fast unto-death strike and later self immolation to pressure the state and the central governments to give in to their demand.

Although the GJM has postponed its plans for the fast unto-death strike due to the presidential election, the party's youth wing has started a ground work for preparing youths for self immolation in days to come, party leaders said.

"After we announced that we would go for self immolation to meet our demand, I have been flooded with hundreds of proposals and messages from the youths and people of the hills who have expressed their desire to sacrifice themselves for the cause," GJM youth wing Yuva Morcha president Prakash Gurung told PTI.

He said there are "no pre-conditions and those ready to sacrifice themselves will do on their own terms and desire".

He did not divulge details of the people who have sent such proposals but merely said "the agitation will intensify in days to come".

Prakash, who had resigned from Gorkhaland Territorial Administration (GTA) in May, had proposed to launch a separate statehood agitation on the line of the Telengana stir.

Darjeeling has a history of self-immolations over the demand of separate state. In July 2013, a 45-year-old supporter had set himself alight at the Dambarchowk in Kalimpong town (now a district). He died of burn injuries a month later.

Another GJM supporter, a 32-year-old physically challenged man, had attempted immolation in 2013 but survived after prolonged treatment.

The picturesque hill station has earlier witnessed a 40- day bandh in 1988 and a 44-day one in 2013. This indefinite shutdown entered its 32nd day today.