Many Flip-Flops in Telecom During BJP Rule: Tata 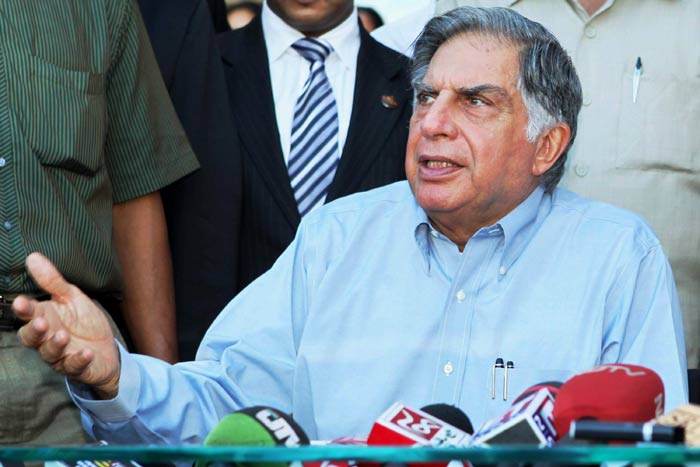 Print
A
A
A
increase text size
Outlook December 09, 2010 12:10 IST Many Flip-Flops in Telecom During BJP Rule: Tata

outlookindia.com
-0001-11-30T00:00:00+0553
Tata Group supremo Ratan Tata today strongly came out in support of the government's 2G spectrum allocation policy saying it broke the powerful cartel, and backed the probe covering the period since 2001 when BJP-led NDA was in power.

He also hit out at BJP saying "many of the flip-flops in the telecom policy occurred during the BJP regime".

Tata's strong comments came in an open letter to former telecom entrepreneur and Rajya Sabha MP Rajeev Chandrasekhar who had hit out Tata for allegedly not being transparent and being one of the biggest beneficiaries of the government telecom policy.

Tata's suggestion for extending the period of probe came within a day of the Supreme Court seeking to widen the ambit of CBI probe into the 2G spectrum scam to cover the policies introduced in 2001 by the NDA regime.

On the allegation that group company Tata Teleservices (TTSL) was a beneficiary of out-of-turn allocation of spectrum, Tata said that the true position is that TTSL has not, "I repeat not" been advantaged in any way by Raja or any earlier minister.

Taking a strong exception to an open letter written to him by Chandrasekhar, Tata said this was politically motivated and was aimed at embarrassing Prime Minister Manmohan Singh and the ruling party.

Chandrasekhar was the past president of Cellular Operators Association of India (COAI), the lobby GSM operators. GSM one of the two technology platforms, the other being CDMA on which TTSL was offering services prior to the use of dual technology came in 2008.

The leading GSM operators are Bharti, Vodafone, Idea, Aircel and several new operators such as Uninor, while the CDMA space was mainly held by TTSL and Reliance Communications before both of them were granted GSM spectrum.

"Your affiliation to a particular political party is well-known and it appears that political aspirations and their endeavour to embarrass the Prime Minister and the ruling party may well have been the motivation behind your letter," Tata told Chandrasekhar.

Alleging that some media houses were also partial in the coverage of the entire issue in deference to the owners who were the real gainers in the telecom sector, Tata said Chandrasekhar had kept the current trend of "attempted character assassination through widespread media publicity couched in pain and concern for upholding ethics and values".

Taking the powerful GSM operators head on for what he termed as holding of spectrum free of cost, Tata said, "Recent policy (allocation of licences in 2008) broke the powerful cartel which has been holding back competition and delaying the implementation of policies."

He said the changing policy from auction to revenue sharing for telecom operators during the BJP regime could have cost a loss of about Rs 50,000 crore to the exchequer if calculated on the basis as done in the recent CAG report that said the 2G spectrum allocation scam cost Rs 1.76 lakh crore.

Detailing the developments in the telcom sector during the NDA government led by Atal Behari Vajpayee that he had asked the then prime minister for an "open and transparent" process.

Alleging that Chandrasekhar had been actively liasioning with the government in the telecom arena at the behest of powerful GSM operators, Tata said certain politically connected operators had willfully subverted policies under various telecom ministers which has subsequently been regularised to their advantages.

"The same operators continued to subvert policy, have even paid fees for spectrum, even before the announcement of a policy, and have de facto ownership in several new telecom enterprises."

Chandrasekhar had accused Tatas of adopting double standards and had said in an open letter to Tata that by virtue of dual technology, according to the CAG, TTSL has caused a loss to the exchequer to the tune of about Rs 19,074.80 crore.

On the issue of "out of turn" allotment to TTSL (as claimed by Chandrasekhar), Tata said "You have chosen to misrepresent the facts as they suit you to justify the claims you have made."

Tata, who at present is abroad, said in an open letter to Chandrasekhar, "The company (TTSL) has strictly followed the applicable policy and has been severely disadvantaged..."

TTSL is yet to get spectrum in the key Delhi circle and also in 39 other districts.

The 2G scam ostensibly revolved around Raja's alleged misdeeds and some parts of the CAG report were quoted as having indicted the minister, Tata said, adding "much has been made about the hypothetical loss to the exchequer in the grant of new licences and the grant of spectrum on the basis of 3G auction price."

He asked Chandrasekhar why he chose not to mention about the excess spectrum held by powerful GSM operators and that too free of cost.

"You have also not noticed that the CAG has not ascribed value to 48 new GSM licencees issued to incumbents between 2004-08 and 65 MHz of additional spectrum allotted to them during this period even though the CAG was supposed to cover the period from 2003," he said.

He claimed that Tatas have not "wavered in upholding our values and ethical standards" despite the erosion in the ethical fabric in the country and despite the efforts of others to draw the group into controversy and endeavour to besmirch its records.

"When the present sensational smokescreen dies down, as it will, and the true facts emerge, it will be for the people of India to determine who are the culprits that enjoy political patronage and protection and who actually subvert policy and who have dual standards. I can hold my head high and say that neither the Tata Group or I have at any time been involved in any of these misdeeds," Tata said.