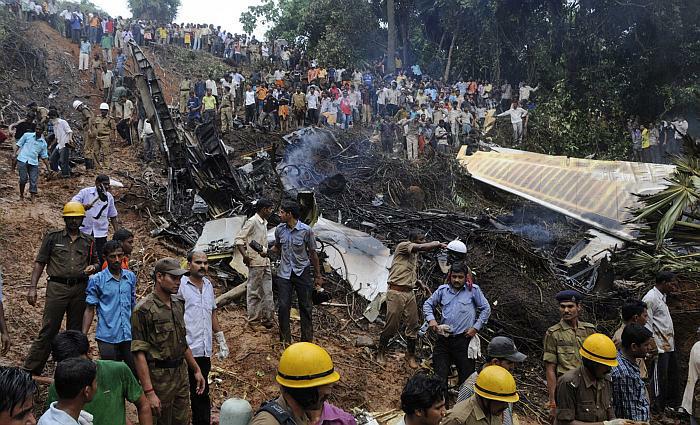 Firefighters perform rescue operations as people crowd around an Air India plane that crashed in Mangalore, in Karnataka. The plane arriving from Dubai crashed Saturday morning after it overshot a runway while trying to land and officials feared that
AP

outlookindia.com
-0001-11-30T00:00:00+0553
Charred bodies, strewn luggage and mangled remains of the Air India aircraft, which overshot the runway at the airport here and caught fire, bore a grim testimony to the tragedy which unfolded early today.

Thick smoke billowed from the Boeing 737-800 aircraft flying from Dubai to Mangalore carrying on board 160 passengers including four infants and six crew members as it hit the fence and went beyond the boundary wall of the airport near Kenjar village.

"The plane shook with vibrations before it split into two. As soon as it hit the ground, I managed to get out and jump into a pit. There was smoke all over as the plane caught fire. After ten minutes, there was an explosion," said Pradeep, one of the seven survivors.

"I can't believe I survived the crash," he said reliving the moments minutes before the aircraft went up in flames.

Pradeep and six others managed to jump from the aircraft which broke into two pieces in the hilly area with thick grass and trees.

He said the plane's initial touchdown appeared smooth at first but trouble started within 15-20 seconds. "First there was a small fire but it spread quickly," he said.

Abdul Puthur, another survivor, said he along with two others, managed to get out of the mangled remains of the aircraft from an opening on the left side.

With his head wrapped in bandages, another passenger Umar Farooq, who also suffered burn injuries on his hands and legs said, "The plane overshot the runway only to stop inside a forest area and then it burst into flames."

About 150 CISF personnel, airport officials and fire service personnel along with civilians and local police were quickly pressed into service to pull out any survivors out of the burning plane.

But they faced difficulty reaching the spot because of the narrow roads, hilly train and rain.

The entire area around Kenjar village near the crash site and the airport has been cordoned off. The bodies of passengers were strewn near Kenjar Gudda, a hillock.

"There were rains in the morning in this forest area and it affected the rescue operations," Sumit Ameen, an eyewitness said.

Chandrasekar, another local, said they could not rescue many passengers as by the time they reached the spot, many were dead.

Puthur, a shop manager in Dubai who was returning home after a gap of five months said, "One of my co-passenger fell into the fire while one escaped with me through the opening that was made after the plane broke into two. I found another person. Together we walked for about 20 minutes through the jungle before locals came and helped us."

For 24-year-old Saudi-based businessman Sameer A Shaikh going to attend the last rites of his grandmother, the plane crash was a double blow as he lost 16 relatives in it.

Many of the dead were still strapped into their seats, their bodies charred beyond recognition, rescue workers said.

Two rescuers who struggled through the slushy steep slopes to reach the aircraft were seen carrying a seven-year-old girl with burn injuries to a waiting ambulance. She is being treated at the Mangalore hospital.

Relatives of the victims who were at the airport to receive them wept inconsolably near the wreckage.

The fire fighters used had used DCP (Dicalcium Phosphate Powder) and foam to douse the flames.

The airport at Bajpe, around 20 km north-east of the city centre has several daily flights connecting Mangalore with most major cities in southern and western India as well as many major cities in the Middle East.

Continue FREE with Ads Pay Rs. 1 to Read Without Ads
READ MORE IN:
National
Next Story : Condolences for Loss of Lives in Air Crash
Download the Outlook ​Magazines App. Six magazines, wherever you go! Play Store and App Store