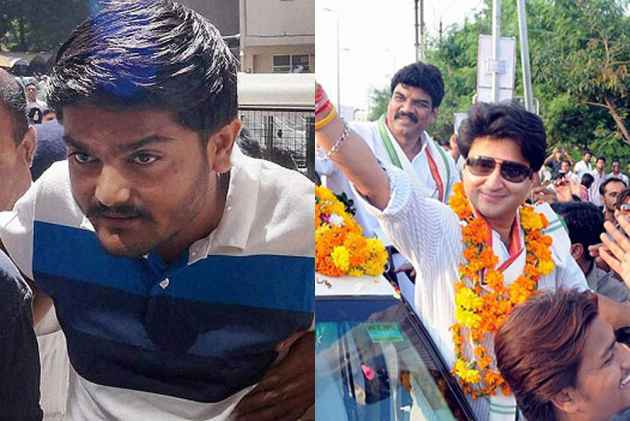 Congress leader Jyotiraditya Scindia and Gujarat's quota stir spearhead Hardik Patel were today stopped from entering Mandsaur, the epicentre of the agrarian unrest in Madhya Pradesh, while on their way to express solidarity with distressed farmers.

Scindia, his party colleague Kantilal Bhuria and a large number of supporters were detained by police at Nayagaon-Jaora toll booth in Ratlam while heading to the neighbouring Mandsaur, where prohibitory orders are in force.

Before their detention, the Congress leaders and their supporters staged a sit-in at the toll booth demanding that they be allowed to visit Mandsaur.

"Why the police is preventing me from going to Mandsaur? This is Hitlershahi," Scindia said.

The farmers' agitation in the state, which began on June 1, took a violent turn on June 6 when five protesters were killed in police firing at Mandsaur.

Subsequently, there was a bandh and several incidents of arson and stone-pelting as the agitation spread to Neemuch, Dhar, Ratlam and Jhabua in western Madhya Pradesh.

Earlier in the day, Hardik Patel was arrested from Nayagaon in Neemuch.

The Patidar Andolan leader, heading to Mandsaur to meet the kin of farmers killed in police firing, was accompanied by Janata Dal (U) leader Akhilesh Katiyar, who was also placed under arrest.

Patel was arrested to prevent "commission of cognisable offences", City Superintendent of Police Abhishek Diwan said. They were released on bail later and taken out of Madhya Pradesh in police vehicles.

Lashing out at the authorities, Patel said, "I am not a terrorist. I have not come from Lahore. I am an Indian citizen and have the right to go anywhere in the country."

He also criticised the BJP-led NDA government at the Centre and said that 50 crore farmers have come together against the saffron party.

In Rajasthan, Udaipur SP Rajendra Prasad told PTI that Patel is planning to go to Indore via Banswara in order to reach Mandsaur.

The video was shot on June 8 when Khatik, who represents Karera Assembly segment in Shivpuri district, was holding a protest at Karera Police Station against the killing of farmers in Mandsaur.

They were booked under the IPC sections pertaining to rioting, unlawful assembly, punishment for obscene acts or words in public and assault or criminal force to deter a public servant from discharging his duty, he said.

Keer's son Sher Singh claimed that his father ended his life due to mounting debts.

The suicide comes days after Chouhan announced a slew of measures to end farmers' woes in the state, which witnessed violent protests over loan waiver and remunerative prices for farm produce.

A high-voltage political drama was also witnessed on June 8, when Congress Vice President Rahul Gandhi was detained on his way to Mandsaur to meet the family members of the farmers killed in police firing.

Chief minister Chouhan sat on an indefinite fast in Bhopal on Saturday with an appeal for peace. He ended his fast on Sunday, saying peace had returned, and assured people that those responsible for the death of farmers would be punished severely.