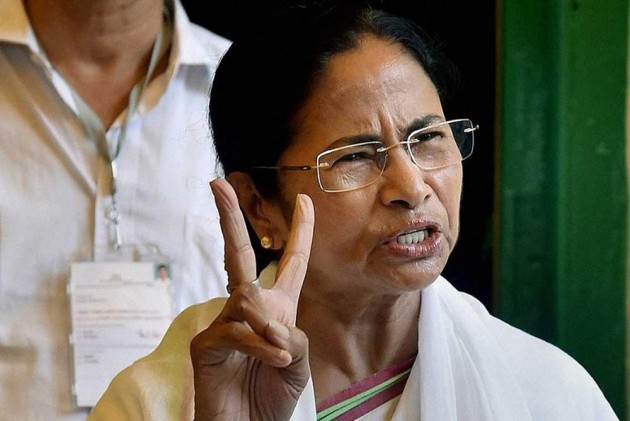 The TMC supremo, who has declared an all out war against the Modi dispensation over demonetisation and arrest of her party MPs in chit fund scam, sought President Pranab Mukherjee's intervention to "save the country from Narendra Modi".

"All opposition parties should forget their differences and come together to save the nation.

"It's high time the President intervened and saved the country. That person (Modi) can't lead the nation. He should step down. There should be a national government," she said, suggesting the names of Advani, Jaitley and Singh to replace Modi.

She appreciated Mukherjee's yesterday's statement that demonetisation could lead to a temporary slowdown of the economy.

The Chief Minister claimed West Bengal had lost Rs 5,500 crore following demonetisation and accused the Centre of "letting loose a reign of terror" on Opposition parties.

A combative Banerjee also dared the BJP leaders to "touch her" when she visits the party-ruled Jharkhand.

"Two of my ministers and party leaders will visit Jharkhand and meet the tribal whose land has been forcibly taken away by the state government. After they come back and give me a report, I will visit Jharkhand. They (BJP) have said they will beat me up, If I visit a BJP-ruled state. I want to see if they can even touch me," Banerjee said.

Her comments followed BJP general secretary Kailash Vijayvargiya's recent warning to the TMC to "mend its ways or face consequences" after a string of attacks on party offices and leaders following the arrest of Sudip Bandyopadhyay, Trinamool Congress' leader in the Lok Sabha, in a chit fund scam case.

Vijayvargiya had wondered whether TMC MPs and even Mamata Banerjee would be able to go around the country and enter New Delhi if his party started protesting against them. Mamata alleged that the Centre wanted to close down

companies whose possible revival was being looked at by Board for Indistrial and Financial Reconstruction (BIFR).

BIFR was an agency of the Government of India under Ministry of Finance whose objective was to determine sickness of industrial units and to assist in reviving those that may be viable and shutting down the others.