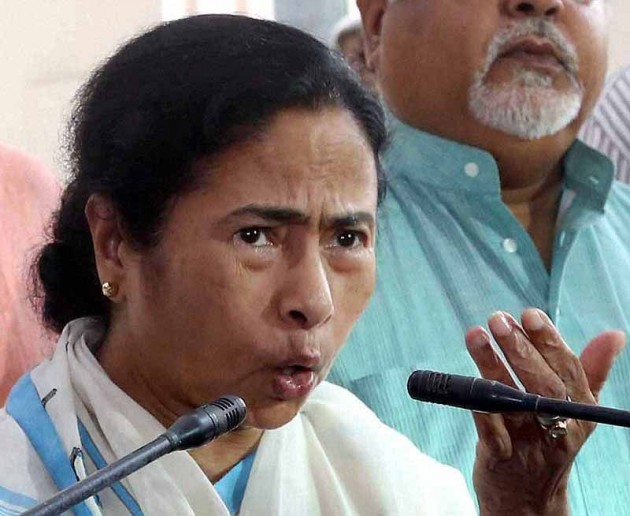 Print
A
A
A
increase text size
Outlook May 08, 2014 09:42 IST Mamata Rules Out Possibility of Modi Becoming PM

Trinamool Congress chief Mamata Banerjee today continued her attack on Narendra Modi and ruled out the possibility of his becoming prime minister saying "those who have cause riots, has no right to become a PM candidate".

Banerjee, who had demanded Modi's arrest, said that "It is not that easy. After (he) had said all this, had I been in the central government I would have tied (him) with ropes and would have made him walk on the road."

She was referring to Modi's statement that if the TMC chief wants to send him to jail then she should not waste money for issuing tenders for the buying of ropes.

"Just tell me which jail I have to go. I will go there myself. I am here. My first job in jail will be to learn the Bengali language," he had said in a rally earlier in the day.

Attacking Modi, she said, those who have caused riots, has no right to become PM candidates.

"There can be a challenge on it if any day opportunity comes. But that opportunity would not come. The opportunity won't come, do not worry. Some with money are projecting (Modi as PM) like gas balloon. On May 16, the gas balloon will burst and when the ballot boxes would be opened it will be only see two flowers (the symbol of TMC)," Banerjee said, ruling out the possibility of Modi becoming PM.

With the Trinamool Congress supremo demanding his arrest, the BJP's prime ministerial candidate at three rallies in West Bengal today said that she was angry with him for raising the issue of Bangladeshi infiltrators which she herself had raised in 2005.

"Didi gets angry with me as your love for me increases. She remembers me 200 times a day. I don't know what she says of me. But Didi, your every word is blessing for me," Modi told an election meeting at Krishnanagar.

The West Bengal chief minister attacked Modi at three rallies in minority-dominated Budge Budge, Metiabruz and at Chowrashtra in Behala.

"People of Bengal were being dubbed as refugees and shamed. Some people were being called infiltrators. If they try to divide Bengal, if they try to evict anyone, I will guard you. I will not let anyone touch you. He said I respect refugees. Who is a refugee? Does he understand what it means?" she said.

"Those who came here even after 1971 were Indians. The Indira-Mujib treaty is clear on this," she added.

"After we came to power in the state we took steps and 88 lakh bogus ration cards were detected most of them were CPI(M) cadres," she said.

Addressing another meeting, she slammed Modi on the issue of Bangladesh infiltrators.

"Modi dubs all who came from Bangladesh as infiltrators. Who is he? From where did he get that audacity?," Banerjee questioned.

"Now he talks about Matua community. He said they are not citizens of India. Is he a donkey? They are Indian citizens," the TMC supremo said, adding "I will not tolerate if he insults Bengal."