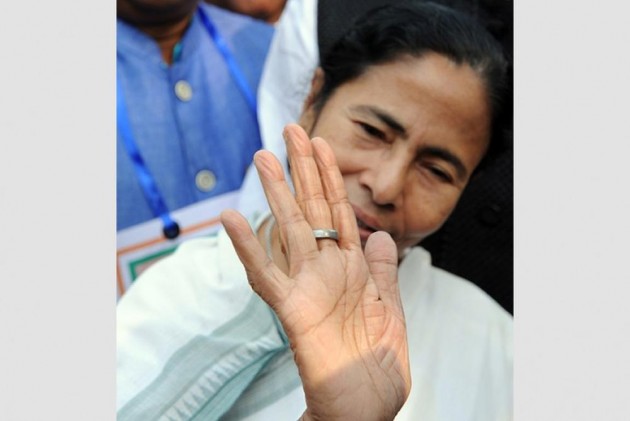 Demanding that the prime minister should apologise and resign taking responsibility for his "failure" on demonetisation, West Bengal Chief Minister Mamata Banerjee today dared the Centre to arrest all the TMC MPs, charging the Modi government of pursuing "vendetta politics".

"Prime Minister Narendra Modi should immediately step down taking responsibility for his failure to give relief to the people even after 50 days of demonetisation," she told a press conference at the state secretariat.

Furious over the arrest of her party MP Tapas Pal for his alleged involvement in the Rose Valley chit fund scam, the Trinamool Congress supremo said, "He (Modi) can arrest all of our MPs, I do not care. This is nothing but vendetta politics. We will continue with our protest (against demonetisation).

"I came to know that they (CBI) have arrested one of our MPs. It is only because of our protest against 'notebandi' that this is happening. This is nothing but vendetta politics."

Claiming that she has "all the information" about the Centre's next step, Banerjee said, "I already have the list of my party leaders who will be summoned next (by the CBI)."

Asked if TMC leader in Lok Sabha Sudip Bandopadhyay, who too was summoned by the central agency in the same case, would appear before the CBI, Banerjee said, "He will definitely go. He will be proud to go. He has not done anything wrong.

"The SEBI and RBI did not perform their duties by not acting against the chit fund companies. These companies are not under the jurisdiction of our state. They (SEBI and RBI) have given them protection."

The TMC supremo wondered how could a person, well established in public life as an actor or a sportsperson, be arrested for accepting the hospitality of a company.

Banerjee referred to Sahara group, which too is under the lens, and wondered if the central agencies were "sleeping" at that point of time.

Continuing her tirade against Modi, the chief minister said either someone else in the BJP should take over as the prime minister or a "national government" (comprising all the parties) should govern the country till the next general election.

"The country has never witnessed such a situation even during the British rule or Emergency," she added.

Banerjee alleged that Modi was taking all the decisions on behalf of Chinese company Alibaba.

"Now, Alibaba and four aides are taking all the decisions. Even the finance minister does not know about it. He (Arun Jaitley) was not aware of the (demonetisation) decision. They (BJP) are bulldozing the people. They want to take the money of the poor and siphon it off to foreign countries," she alleged.

Claiming that there was no cash in the banks, she said, "A person who has no credibility cannot lead a country like India. Why is Narendra Modi busy working for the branding of a company in China which has been blacklisted by the US and other countries."

Banerjee, whose party has 34 MPs in Lok Sabha, had participated in the meeting and press conference of opposition parties, convened by the Congress in New Delhi on the issues of demonetisation.