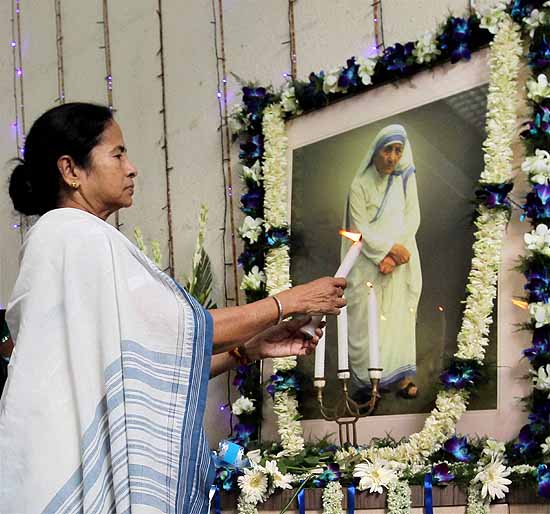 Print
A
A
A
increase text size
Outlook May 22, 2016 20:43 IST Mamata Banerjee to Attend Mother Teresa's Canonisation in Rome

West Bengal Chief Minister Mamata Banerjee will be travelling to Rome this September to attend the canonisation ceremony of Mother Teresa where she will be declared a saint.

"I have accepted Sr Prema's invitation to be present at the canonisation of blessed Mother Teresa in Rome on September 4," Banerjee said on Twitter.

In March, Pope Francis had announced that Teresa, who founded the Missionaries of Charity, will be elevated to sainthood after the Church recognised two miracles she was said to have carried out after her death in 1997.

The city-based Missionaries of Charity is now led by its Superior General German-born Sister Mary Prema.

Banerjee will be accompanied by Sister Prema and Archbishop D'Souza in Rome.

Teresa, who will now be a Saint of the Roman Catholic Church, was beatified by then Pope John Paul II in a fast- tracked process in 2003.

Sister Prema today met Banerjee at her home to invite her for the occasion.

"It is a solemn milestone and the chief minister spontaneously accepted the invitation," Trinamool MP Derek O'Brien said.

A number of other faithfuls will also be present in Rome during the ceremony.