Malegaon Conspirators' Plan Was to Push for 'Hindu Rashtra' 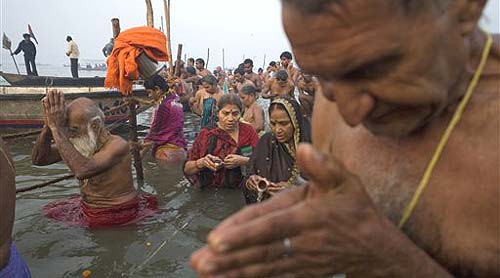 Print
A
A
A
increase text size
Outlook January 21, 2009 21:53 IST Malegaon Conspirators' Plan Was to Push for 'Hindu Rashtra'

outlookindia.com
-0001-11-30T00:00:00+0553
Conspirators in the Malegaon blast had planned to set up an underground organisation to inculcate the idea of a Hindu Rashtra among people, and in a meeting held in 2007, they were encouraged to do so purportedly by former BJP MP and VHP leader B L Sharma.

In a transcript submitted by Maharashtra Anti-Terrorism Squad (ATS) to the Special MCOCA Court, a person, cited by the police as being the former BJP leader, is recorded telling conspirators that they need to form an underground movement to create a Hindu Rashtra.

"We should sow the seed for revolution," Sharma said in a meeting attended by alleged conspirators such as arrested Army officer Lt Col P S Purohit and self-styled religious leader Dayanand Pandey.

The transcript is based on a video recording made by Pandey on his laptop, of a meeting held in September 2007.

"It should not be known to anybody, some certain person should be in charge and get people in the organisation," Sharma said.

It could take four to five years to get prepared and there should be funds saved to keep the persons part of the organisation out of public scrutiny, he said.

"We need to get prepared in advance. We need to name this organisation. For example, we could just put a pin code or a code as its name," he said.

Purohit told the gathering they needed to create two organisations, one a "public face" and the other a strong underground movement. "We do not accept the Constitution of this country... And there is no doubt that we must fight," he said.

"In three years we need to take the movement to an international level. Until we get that acceptance a sword will be kept at our necks and heads," Purohit told the gathering.

Attempts to form associations with other countries had already begun and they should be ready in the next year, he said, according to the transcript.

"The revolution should not be only in Maharashtra or Delhi. Until the web is fully spread across the country, we cannot implement this revolution," the Army officer said.

Another person present at the meeting, identified as Bhai Dalvi, also proposed carrying out multiple blasts in the country which would affect lakhs of people and prompt people of other religions to convert to Hinduism.

"There should be multiple blasts across the country where lakhs and crores (of people) are affected...Fear should be there only then will they fall at our feet," he said.

Pandey, who was recording the meet, said it would prompt many people to reconvert to Hinduism and gradually the entire country could be converted into a Hindu nation.

The ATS yesterday filed a 4,300-page chargesheet against 14 accused - 11 of them arrested - in the blast at Malegaon. Six persons were killed and over 70 injured in the September 29 explosion in the textile town.