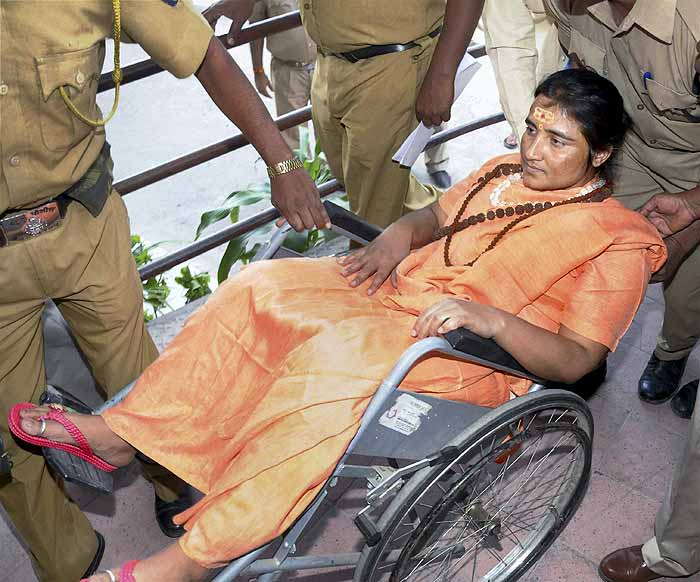 Special Judge S D Tekale rejected the bail application at an in-camera hearing after families of the blast victims objected to Pragya's plea.

Advocate Wahab Khan, appearing for the intervener in the case who was among the injured, said the court pulled up the National Investigation Agency(NIA) for conducting a fresh investigation under the pretext of carrying out further probe.

The NIA had on May 13 dropped the names of Sadhvi Pragya and four others as 'accused' in the blast case in its charge sheet filed before the special court here, citing lack of evidence, and revoked provisions of the stringent Maharashtra Control of Organised Crime Act (MCOCA). It also did not oppose her bail plea moved earlier this month.

"It cannot be said that due to filing of further report by the NIA, there is any change in circumstances. If this is the position (of NIA), then merely on the ground that NIA has given no objection, it is difficult to accept the prayer (bail) of applicant," the special judge said in his order, while holding that there are reasonable grounds to believe accusations against Pragya are prima facie true.

"The court has accepted our arguments that the confession (of other accused) can be relied upon even if the MCOCA is dropped from the case," Khan said.

On the motorcycle used in the blast (that was owned by Singh), the court said that "at this prima facie stage she can't avoid her connection with it being registered in her name and she being the owner of the same".

The judge also said that safe conclusion can be drawn on the basis of witnesses' statement that during the Bhopal meeting (held to plot the Malegaon blasts), Pragya was present and there was discussion about jihadi activities in Aurangabad and Malegaon and (she along with others) discussed preventing it.

"Prima Facie there was a Bhopal meeting and she (Singh) was there," the court observed.

In her application, Pragya had contended that there was no evidence against her.

Though the motorcycle used in the blast was owned by her, according to one of the witnesses, it was in the possession of Ramchandra Kalsangra, an absconding accused, she had said.

Some of the witnesses, whose statements were used to implicate her, later retracted and filed complaints of torture by the ATS, her plea said.

Seven people were killed in the blast at Malegaon, a predominantly Muslim town in north Maharashtra, on September 29, 2008.

Pragya was charged by the Maharashtra ATS in 2009 saying it was her motorcycle that was used to plant the bomb.