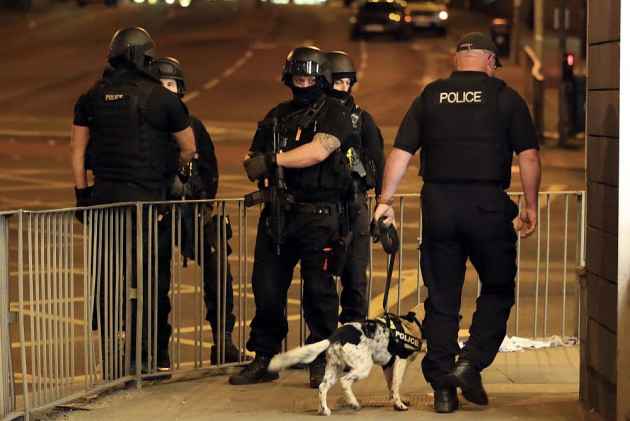 Print
A
A
A
increase text size
Outlook May 23, 2017 13:23 IST ISIS Claims Responsibility For Manchester Blast That Killed 22

The Islamic State terror group today claimed responsibility for a suicide bombing at a pop concert in Manchester Arena that killed at least 22 people and injured 59 others.

The dreaded terror group said one of its "soldiers" carried out the attack, the deadliest in Britain since the 2005 London bombings.

"One of the soldiers of the caliphate was able to place an explosive device within a gathering of the Crusaders in the city of Manchester," the terror group said in a statement.

The statement was posted on Telegram, an encrypted app used by many ISIS fighters and supporters to evade security services.

The terrorist group also released statements in several languages through its central media body praising the atrocity, claiming more than 100 "crusaders" were killed or wounded at the "shameless" concert.

"With Allah's grace and support, a soldier of the Khilafah (caliphate) managed to place explosive devices in the midst of the gatherings of the crusaders in the British city of Manchester," reads one English version.

Security experts have, however, cautioned against taking the ISIS statement at face value as the group has in the past claimed responsibility for lone acts of terror, including that of Khalid Masood on the UK Parliament on March 22.

However, some feel the statement may indicate that the attack may not have been a suicide bombing as despite British police statements saying the perpetrator died at the scene, the group did not name him as a "martyr".

The ISIS has been periodically releasing detailed guidance on how to carry out terror attacks in countries targeting its members in Syria and Iraq, including bomb-making instructions.

The most recent edition of its ‘Rumiyah’ propaganda magazine listed concert halls among "ideal target locations" for attacks.

Soon after the attack in Manchester last night, online social media channels had been rife with comments by the ISIS sympathisers in support of the attack.

Twitter disabled a series of accounts that were purportedly celebrating the attack.

The Manchester attack took place on the fourth anniversary of the killing of British soldier Lee Rigby in London, which was inspired by al-Qaeda propaganda on avenging civilian casualties in the Middle East.

A 23-year-old man from Manchester has been arrested in connection with the bombing.

"We remain relentlessly focussed, in numerous current operations, on doing all we can to combat the scourge of terrorism and keep the country safe," MI5 chief Andrew Parker said in a rare statement.