At age 19, Yousafzai is the youngest person to speak to Canadian members of parliament and senators in a joint session. 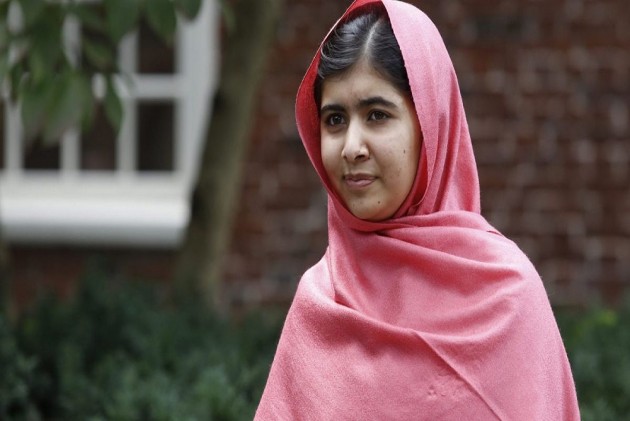 Nobel Peace laureate Malala Yousafzai became only the sixth person to receive honorary Canadian citizenship on Wednesday, as she called on the country to be bold in advocating for girls' education.

Wearing a bright orange scarf to cover her head in accordance with Muslim tradition, the Pakistani activist was welcomed to the seat of Canada's democracy by Prime Minister Justin Trudeau.

At age 19, Yousafzai is the youngest person to speak to Canadian members of parliament and senators in a joint session.

She is also the youngest to receive honorary Canadian citizenship -- a privilege previously granted to five others including Nelson Mandela, the Dalai Lama and Myanmar's Aung San Suu Kyi.

"Dear Canada, I'm asking you to lead once again," she said, to a standing ovation.

She urged Canada to use its turn as president of the Group of Seven (G7) industrialised nations in 2018 to press for the education of girls and refugees.

"We should not ask children who flee their homes to also give up their dreams," she said.

Yousafzai said Trudeau also must ask other world leaders to do more for education.

"If Canada leads, I know the world will follow, she said.

Yousafzai had fought for years for the right of girls to education in her strictly Muslim home region in Pakistan.

She leapt to global fame after a Taliban gunman shot her in the head on a school bus in October 2012 for defending her right to attend school.

Since a successful operation following the attack, she has lived in the British city of Birmingham, where she continues to advocate for women's rights.

During a brief ceremony, Yousafzai was given the Canadian flag from atop the Peace Tower at the entrance of parliament, and a copy of her 2013 book "I Am Malala" was added to the parliamentary library.

She thanked her hosts and expressed excitement in particular about meeting Trudeau, whom she praised for speaking out on behalf of women's rights, gender equality, and refugees "during a time where the world is hopeless."

"I wanted to say that Trudeau is an amazing person and an inspiration," she said, later noting in her speech that "he does yoga, he has tattoos... Everyone was telling me (to) shake the prime minister's hand and, like, let us know how he looks in reality."

In introducing Yousafzai to lawmakers, Trudeau praised her for her advocacy.

"Yours is a story of an ordinary girl doing extraordinary things, an everyday hero... A fearless advocate for girls who wants nothing more than to see more kids in classrooms," he said.

"And on top of that, you're impossibly humble. We Canadians are all about that."

Trudeau said his past experience as a teacher taught him "that going to school is more than just learning about how to read and write.

"Education has the power to change the world," he said. "It can end poverty, fight climate change, prevent wars. But in order to achieve progress, we all have to make sure that all children, girls as well as boys, get to go to school."

Yousafzai had been invited to Canada by the previous Conservative government in 2014 -- when she was awarded the Nobel Peace Prize -- to receive Canadian citizenship in Toronto.

But the ceremony was postponed due to the shooting of a ceremonial guard and an attack on parliament the same day.

Yousafzai decried the violence, saying: "The man who attacked Parliament Hill called himself a Muslim. But he did not share my faith. He did not share the faith of 1.