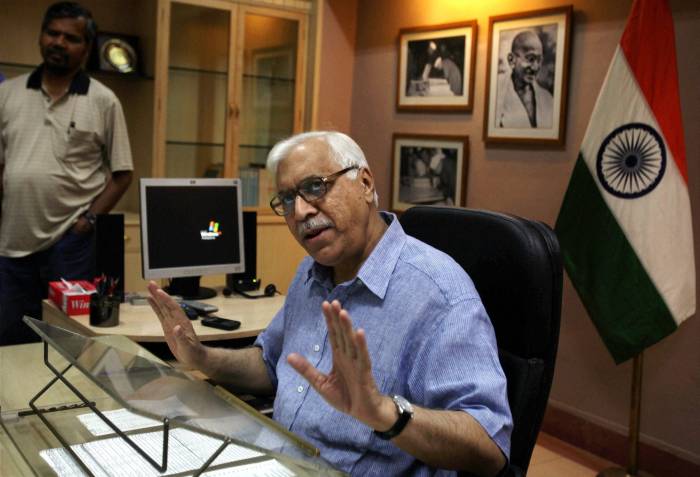 outlookindia.com
-0001-11-30T00:00:00+0553
As he demits office today, happy and contended, outgoing Chief Election Commissioner S Y Quraishi hopes that paid news, which of late has emerged as a big threat to free and fair elections, will be made a cognizable offence.

"We have taken some concrete steps, which have already paid dividends. We have been able to contain it (paid news) substantially. We have now recommended as electoral reforms that it should be made a cognizable offence. So, when the reform proposals go through that will be a very substantive step," he told PTI.

In a wide-ranging interview, he also rejected suggestions of giving statutory powers to the Model Code of Conduct, arguing that "upsetting it (current system) will have unwelcome repercussions".

On suggestions for having a collegium for appointment of the CEC, Quraishi suggested a different formulation, saying a mechanism of credible consultations be set up for appointment of Election Commissioners instead, and not the CEC.

The ECs' appointment be made through wider selection and the senior-most among them be made the chief as a rule, he said.

The following are the excepts from the interview with him.

You are demitting office of the CEC after serving the poll body for six years. Can you sum up your experience and legacy?

It has been both demanding and fulfilling. The responsibility entrusted by the Constitution, the faith of the people, the scale of operations and the consequences of a mistake made it a challenge for the incumbent.

Rising to this challenge is impossible without the support of one and all. I am happy if I have made some contribution to the legacy that has reinforced Indian democracy. As Election Commissioner, I played my part in several memorable elections including the national elections in 2009.

Fortunately during my tenure as the CEC, the general elections in the 11 states including some seriously difficult ones, have been very peaceful, free and fair. A great additional satisfaction is that we could usher in a participation revolution in these elections through a pioneering Systematic Voters' Education Programme.

The National Voters' Day of January 25, meant to enroll newly eligible youth, has become one of the largest youth empowerment events of the world in a short time. We began a belated but determined fight against money power in elections and this has created an impact already.

So also ours was the maiden regulatory action in the country against the menace of paid news. Sufficient push was given to electoral reforms and the day is not far when these will see the light of the day.

The setting up of the India International Institute of Democracy and Election Management (IIDEM), a training and resource centre, in a record time, is something to be really proud of. ECI has taken proactive steps to accept its due role as leader in global collaboration and exchange of best practices in election management and related democratic processes. It's a very happy count at the end of the day in less than two years.

Do you think you left some unfinished agenda?

There would always be some unfinished agenda, some works in progress.

You have been pro-active in your career as bureaucrat. What are your plans now?

There is a lot to share with family, friends and the wider society. It is never a dull day, if your mind is alive. I do have a couple of writing projects which will keep me fully occupied.

Your views on suggestions for giving statutory powers to Model Code of Conduct, particularly when a Parliamentary Standing Committee has also pushed for it?

MCC has been of great help in election management, especially in maintaining level playing field. Its usefulness comes from the consensus of political parties and the quickness of its effect. We know how impractical it would be to seek legal remedies in case of a MCC violation, when one is required to handle a live situation during the election process. It is a great instrument for peaceful and fair elections. Upsetting it will have unwelcome repercussions.

The last assembly elections have been controversial, with the EC having face-offs with some ministers. A section believes you let them off lightly. What do you say?
I would not say that the elections have been controversial. Enforcement makes news and evokes different reactions from competing parties. We were neither too soft nor too harsh; our actions were just right. The application of the Code is done uniformly, based on the facts of a case. It's the Commission's responsibility to enforce MCC in letter and spirit. We expect everyone to cooperate.

Your views on electoral reforms not being successful in bringing them about?

A lot of spadework has been done. The Commission had very appreciatively joined an exercise at the suggestion of the then Union Law Minister, Mr (M Veerappa) Moily for nationwide consultations for several months towards framing of a more mature legislation.

You have called for statutory protection for two other ECs. Do you suggest that ECs be appointed through a collegium, especially after the opposition raised such demands?

Yes, I have long held the view that the fresh appointment of an Election Commissioner, who goes on to become the CEC later on, should be done through a mechanism of credible consultations. Two of my predecessors are also on record having made similar suggestions.

The credibility of the institution of the Election Commission is so paramount that anything which enhances it, is most welcome. Therefore, it is a good idea if the appointment of new Election Commissioners is made by a wider selection committee which should also include the CEC.

At the same time, the senior-most Election Commissioner should automatically be elevated as the chief under a law so that the ECs do not feel that they are on probation and are able to discharge their functions without fear or favour. This, in my opinion, is vital for the independence and neutrality of the institution.

There was a proposal to have paper trail of electronic voting machines (EVMs). What is the progress on that?

The feasibility of the proposal, which is based on a decision taken by the EC in a meeting with political parties, is being examined with due care and urgency. We have made enormous progress and a large field trial is expected within a couple of months.

How has been the Commission's relationship with the government. At times, it would look to be strained?
On the contrary, it has been excellent. In fact, we never had so much of support and cooperation from the government we received during my tenure.

First, the Home Ministry. They gave us as many companies of central armed police in all elections as we requested and for the duration that we suggested. It was advance availability of these forces which enabled us to conduct extremely peaceful elections.

Support from the Finance Ministry was unprecedented. First, they gave us staff support to man our newly created Expenditure Monitoring Division. Then they gave us over 2,000 officers to work as Expenditure Observers from both Income Tax service and Customs and Central Excise service. More than 800 officers of the Investigation Directorate helped us to set up systems to go after the money power which has been a bane of elections.

The Finance ministry also gave us nearly 50 crore rupees as the first installment of our newly created IIDEM. All the media divisions of Ministry of Information and Broadcasting gave us enormous support and, for the first time, did not even charge us a rupee unlike earlier. The Ministry of External Affairs helped us enormously in all our international cooperation activities.

The Department of Banking and Department of Posts have agreed to participate in our 'Know your BLO' (booth level officer) campaign by putting up the details of BLOs at all their branches, ATMs and post offices.

What about your training institute that has hogged limelight of late?

The ECI launched its training institute (it did not have one for sixty years) by the name, IIDEM, about a year back. The Commission is able to plan comprehensive and modern training programmes for millions of election officials and stake-holders through this institute, besides sharing our much-acclaimed capacity in electoral democracy management with other countries.

The constributions of the government in launching this institute in record time have been significant. About 50 courses have already been held at IIDEM, 40 out of them for our own officials. The government has been generous in providing initial funds of about Rs 51 crores for IIDEM. The DDA has given 5 acres of land on which foundation of a new campus has been laid. An architect has been selected to build the new campus.

The MEA has extended a special ITEC scheme for training of overseas participants at IIDEM. It has also sanctioned special courses to be conducted for SAARC election officials. We are in the process of recruiting regular faculty for the institute. The institute, will, in no time, become a national asset to be proud of.

The Commission under you has had elaborate international engagement. Please throw some light on it?

True, the Commission's international cooperation agenda has expanded significantly over the last two years. This is only an affirmative and emphatic response to continuous global demands within the responsibilities of a precious national institution.

Starting in 2004, the Commission has now over 10 MoUs with its counterparts to share the ECI as an established leader in the global electoral fraternity. Without doubt, this has meant an increase in bilateral and milti-lateral exchanges including visits by the Commission, several of them directly in response to the MEA requests.

Have you found it harmonious to work with your two other colleagues. There were problems of harmonious working in the past?

The EC has been a picture of harmony in the last two years. There was not a single decision that was not taken unanimously, after harmonising occasional different perspectives. Both my colleagues have been wonderful. The Commission is a three-member body which ensures a balanced and judicious approach at all times and in all types of situations. The CEC is not the lone decision maker. He, who is first among equals, just happens to be the face and the voice of the Commission. I got all the credit though all decisions were collective.