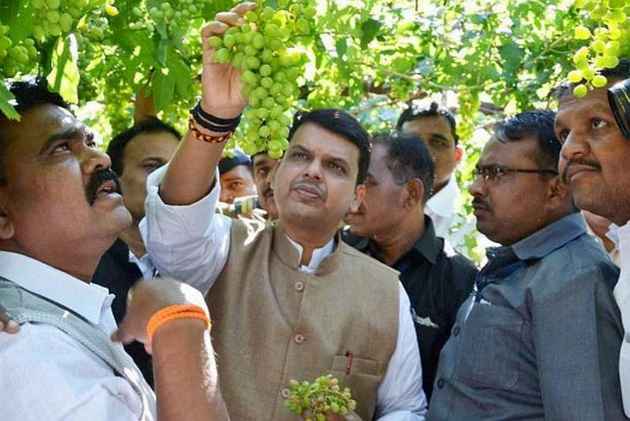 The Maharashtra government has expanded the ambit of its loan waiver scheme to include even those farmers who had taken loans after 2008, Chief Minister Devendra Fadnavis has said.

Earlier, the loan waiver scheme, titled the 'Chhatrapati Shivaji Maharaj Sanman Yojana', covered only those farmers who have loan outstanding between April 1, 2012 and June 30, 2016.

Fadnavis yesterday made the announcement of extending the loan waiver during his fortnightly programme 'Mi Mukhyamantri Boltoy'.

BJP legislators Anil Bonde, Ashish Deshmukh, Sanjay Kute and Prashant Bamb called on the chief minister yesterday and demanded that the farmers who have taken agriculture loans after March 1, 2008 and before May 31, 2012, be given benefit of the loan waiver scheme announced last month.

The previous Congress-led UPA government under Manmohan Singh had announced an agriculture loan waiver and a debt relief scheme of Rs 71,000 crore for the country in 2008.

That scheme covered cultivators who had an overdue of agricultural loans up to February 29, 2008.

"Fadnavis agreed to the demand raised by the BJP legislators and announced to include those farmers in his loan waiver scheme," stated a release issued by the chief minister's office.

The chief minister also extended the date to repay overdue of loans taken by farmers in 2016-17 and who are regular payees, from the earlier June 30, 2017 to July 31 this year, the statement said.

Under the one-time settlement scheme, farmers can repay outstanding loan in four instalments. Once they repay three instalments, the government will give the fourth instalment of Rs 1.5 lakh as loan waiver, he said.

Replying to queries by reporters on the inclusion of farmers from Mumbai and its suburbs in the loan waiver scheme, Fadnavis yesterday said he will speak at an "appropriate time".

"The figures (on number of eligible farmers) have been provided by the state level banking committee and they will be rechecked before giving the waiver benefit," he said.

As many as 813 farmers from Mumbai city and its suburbs figure in the list of probable beneficiaries eligible for benefits under loan waiver scheme.

The Mumbai city and its suburbs are urbanised areas, leaving little scope for farming activity in the country's commercial nerve centre.

The Fadnavis government last month announced a "historic" loan waiver of Rs 34,022 crore for farmers and subsequently laid down the eligibility criteria for availing it.

The mega loan waiver was announced by the BJP-led government after a state-wide agitation by farmers in the first fortnight of June.

Meanwhile, the committee formed under revenue minister Chandrakant Patil to study the loan waiver will now be dissolved and a new panel would be set up to implement the loan waiver scheme.

"A committee under minister (for co-operation, marketing and textiles) Subhash Deshmukh will be formed to implement the loan waiver scheme. The farmers will be asked to approach banks to get benefit of the scheme. They will have to file an affidavit saying they are eligible for the waiver," said Patil, who is at present the head of the state ministerial group on loan waiver.

"The government will not verify the affidavit. The banks will deposit the money directly into the account of beneficiaries," the minister said.

Asked if action would be taken against those who file fake affidavits, Patil said, "If it is later found that the affidavit was fake, the amount will be recovered from the farmer."

He said generally neighbours and other villagers inform the state government if a specific farmer is actually a beneficiary.

The minister claimed that the government may have to spend less than the around Rs 34,000 crore set aside for waiving the loans as there are various terms and conditions for availing the benefit.

An official from the department of co-operation said that the list of farmers, eligible for benefits under the loan waiver scheme, is yet to be verified.

"The state will verify that farmers from Mumbai city and suburbs meet the criteria before giving any benefit and ensure that only eligible and needy farmers get the benefit of this loan waiver scheme," he said.