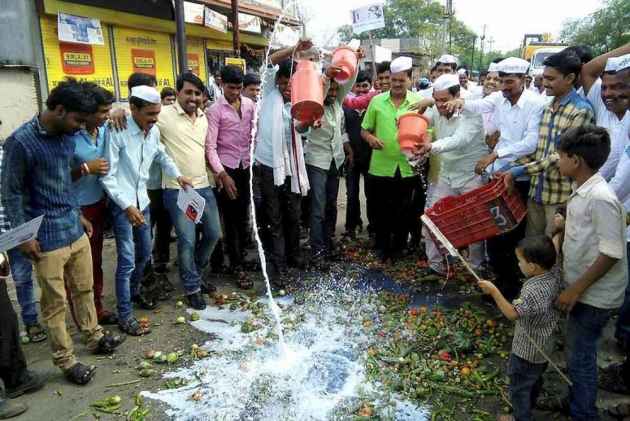 Sena president Uddhav Thackeray, meanwhile, ridiculed the government's offer of holding talks only with "true" farmer leaders. "Who are these farmers? Is there a real farmer in your ministry," the Sena said, in an editorial in party mouthpiece 'Saamana'.

Making light of the Sena ministers' absence at the cabinet meeting, Finance Minister Sudhir Mungantiwar of the BJP said, "The Sena ministers did not boycott the Cabinet meet but sought permission not to attend it which the chief minister granted."

Revenue minister Chandrakant Patil, also of the BJP, said, "It is not correct to say that Sena ministers came to the Cabinet (meet) and left in a huff. The Sena ministers arrived (at the meeting) and told the chief minister that Uddhav Thackeray is not here (in Mumbai) and they would not attend the Cabinet meeting, till they have a word with the Sena president."

Transport minister Diwakar Raote of the Shiv Sena said his party ministers did not attend the Cabinet meet.

Sena ministers held a meeting at the official residence of industries minister Subhash Desai, ahead of the Cabinet meet.

Meanwhile, agitating farmers put a lock outside the house of BJP legislator R T Deshmukh from Majalgaon in Beed district.

Security outside homes of ruling party legislators and MPs has been beefed up following the 'lock up' protest.

The developments come a day after Chief Minister Devendra Fadnavis announced that Maharashtra government will come out with a loan waiver for farmers before October 31, which will benefit 1.07 crore farmers with less than five acre land holding.

"Before October 31, the distressed farmers who need help will be given a loan waiver. The modalities are being worked out and I can say with conviction that this will be the biggest loan waiver in Maharashtra's history," Fadnavis had said.

The Sena today hit out at the Centre for allegedly pushing debt-ridden farmers into greater despair and allowing their farms to fall into ruin by 'brandishing the knife' of demonetisation.

"After years, monsoon last year brought hope to farmers and they had a bumper production but the knife of demonetisation led them to sell their produce at dirt cheap rates. They couldn't even recover their input costs and as a result, debt ridden farmers plunged deeper into losses," the Sena said in an editorial in Saamana.

The bickering ally also questioned the "apathy" of the government towards the agricultural sector at a time when the industry and services sector kept receiving periodical boost for their development.